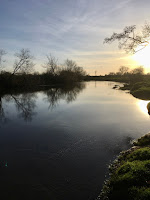 Post Lockdown II all of the East Midlands will in Tier 3, so the Friday night takeaway in support of the local pub will continue for the time being. However, in terms of fishing, there is actually a saving grace for me in that I live at the tripoint of Notts, Derbys and Leics. Just a short trip of a couple of miles down the road under the previous arrangements wasn't possible as it meant crossing different tier boundaries. Not that I will be travelling far anyway - I've got plenty of water locally at my disposal. Unfortunately, it's all of the other factors that do their best to put a spanner in the works, so when an empty work diary coincides with calm, bright weather conditions and the river is at a nice, steady level it's an opportunity not to be missed. 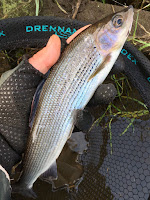 I even had a pint of maggots in the fridge, purchased on the off-chance at the weekend. First light therefore saw me pulling up in an empty car park next to the River Derwent near Draycott. At first glance conditions looked to be spot on, with not a breath of wind disturbing the surface of the river. Whilst it was cold enough to numb the fingers as I pulled on my waders, I soon warmed up as I got moving. Found that the walk upstream to the top of the section was in stark contrast to the summer as the flood banks had received their winter haircuts and the stands of Himalayan balsam had been reduced to stubble. A cursory inspection of the swims below the weir found them to be too pacey and "boily" for my liking, so I headed back downstream to one of my trusted spots, a long, steady glide. 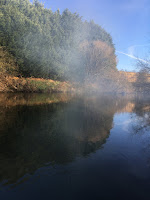 First run through, "too shallow" I thought, so I increased the depth on the Avon float by 6 inches. Next cast the blaze orange tip disappeared and the first grayling came madly gyrating to the net. No better sign that you're on the money and I quickly added half a dozen more - peas in a pod. However, as the sun started to hit the water, my loose feed started to attract some undesired attention, my float dithering and bobbing on its way down the swim as the double maggot hookbait was harassed by little, stripey bait botherers. The good folks at the "cracker factory" had also started doing some pyrotechnic testing, the shotgun retorts accompanied by clouds of acrid smoke that started to drift across the river, stinging the nose. 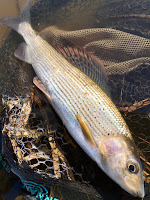 I therefore made a move downstream, accompanied by a flock of cackling, hedge-hopping fieldfares. However, I couldn't buy a bite in the next couple of spots. Again, my usual "banker" swim looked just a bit too fast and turbulent for fish to be comfortably sat out in the flow. This made me stop and think where they might be instead and I remembered seeing a cattle drink on Google Maps, where the bank had been broken down to create a gently shelving gravel "beach" on the inside of a bend. Looked ideal with a decent run of flat water running through at a nice walking pace.Trouble was that the low sun was now shining straight upstream, causing me to squint through the glare to see my float. 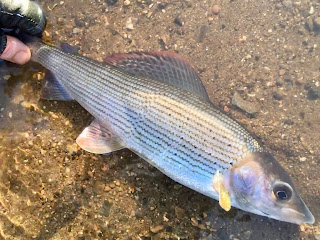 However, I persevered and was glad that I did as it became obvious that a few fish were lying at the bottom of the shelf and were feeding happily despite the bright conditions and gin clear water. Remained in that spot until I could no longer ignore my growling stomach. Finished with 21 grayling to just over a pound and a single, gate-crashing dace. All had been nailed by the size 16 Kamasan Animal, with just one lost to a broken hooklink right at the knot, possibly weakened by the previous fish.

Stopped off at the golden arches on the way home for a rare guilty pleasure to round off a very pleasant morning!