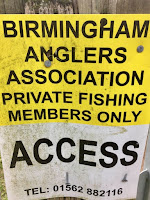 Growing up in Birmingham my early fishing experiences were mostly centred on the numerous park pools we had at our disposal, but occasionally dad would take us out to the Birmingham Anglers Association waters on the River Severn to get beaten up by the resident barbel. Whilst I later escaped Birmingham to go to university and didn't return, my brother never left. Lockdown was therefore a difficult time for us, having to put family celebrations for his 50th on hold and then him getting diagnosed with advanced prostate cancer, thankfully now successfully treated. I was therefore prompted to buy a BAA ticket at the start of this year with a view to reconnecting and dragging him away from the golf course. 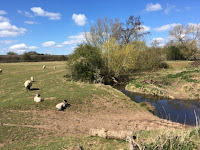 Instead we were plunged into lockdown III almost immediately, unfortunately putting an end to any travel for the remainder of the coarse river season. Fast forward three months, not wanting the ticket to go to waste and now with freedom to travel, I had a look at the BAA website to see if there were any suitable places where I could take the fly fishing gear. Spotted a water on a tributary of the River Avon that looked promising - in the middle of nowhere and with a decent head of brownies according to the reports. 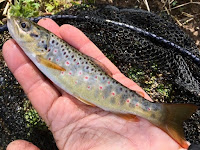 Booked a day off and, after a leisurely drive down the M42, I arrived at the venue mid-morning in bright sunshine. Hadn't really known what to expect, so had taken two outfits - my 7' brook rod and a heavier 8' 6" rod to give me a bit more reach if required. As it was I carried both and mixed & matched during the day as it allowed me to have two slightly different set-ups and therefore didn't have to change flies all the time. Was pretty cold despite the sun, so put on my quilted jacket and woolly hat. In fact I didn't take them off again until it was time to go home! 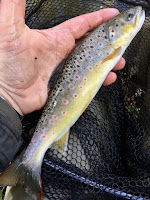 At first glance the river next to the parking spot wasn't particularly inspiring -  shallow, clear and featureless, with the snotty, brown growths of diatoms that are prevalent at this time of year. However, not far away I could see the sunlight reflecting off some riffles and the gleam of some clean gravel. With the stretch effectively split in two by a road bridge I started off by heading  upstream. As there was obviously nothing moving yet I tried flicking a gold-headed GRHE nymph up into the faster, broken water and letting it trundle back towards me. However, by the time I was nearly at the upstream limit I'd not had a sniff. Came to a small pool at this point, so changed tack and flicked a size 10 mini-streamer (apologies to the purists!) downstream alongside the tree roots . 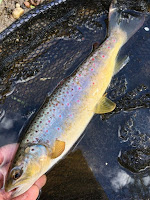 Jinking it back along the bottom with short erratic strips it got hit twice before I hooked the culprit - a small, but  perfectly-formed and colourful Warwickshire brownie. A few casts later I had two more in the net, albeit even smaller than the first, so headed back downstream to try the same tactic in the pool under the bridge where I'd left the car. Flicked the streamer into the shadows under the bridge with a bow cast and let it swing alongside the brickwork before again jinking it back. Had only moved it a couple of times when it got whacked by a better fish. After a couple more casts it seemed that he was the only one in residence, so I went back to the car and had a sandwich and a cup of coffee before heading downstream. 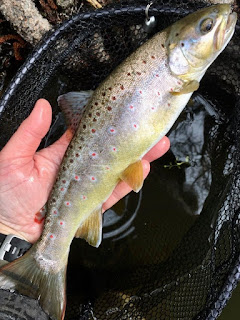 In contrast to upstream, this section of river had a little more depth and a lot more features. As there was still a distinct lack of any insect life visible I therefore decided to continue with the streamer rod. Again, actively working the fly around the tree roots and the structure in the deeper pools was the winning method. By the end of the afternoon I'd had eight wild brownies, the best fish coming right at the end - a proper small stream bruiser with a nicely marked adipose fin. Had to slide down the bank into the water to land him and it was a shock to feel how cold the water actually was, even through my waders. However, back at the car, having not seen anything move all day and having packed away the rods, I saw at least three fish start to rise just a few yards downstream - Sod's Law! Failed to identify what they were feeding on as they stopped rising almost as quickly as they started, but filed their location away for potentially another visit.
Ten minutes later I was having a cup of coffee with the brother on his patio next to the Straford-upon-Avon canal - a nice end to a very enjoyable sesson on a new venue.
Posted by Toodle 2 comments: