Christmas this year was spent with the in-laws in Pembrokeshire. Knowing that the car would be packed to the gunnels I'd taken the precaution of leaving some tackle when we were down at the end of November. With Christmas Day festivities and Boxing Day recovery out of the way, I made plans to fit a couple of sessions into an early morning window between sunrise and high tide while everybody else was still in bed. 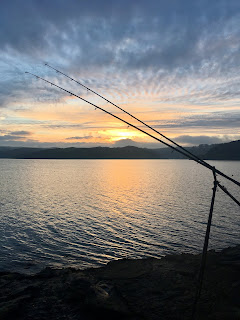 Took advantage of the hour difference in tide times to travel up to the north coast first of all, knowing that I could fish the same state of the tide the following morning down on the Haven. Left bright and early and was in Goodwick before sunrise. Popped into the local garage to stock up with some more mackerel and mini-squid from their freezer, before heading along to the end of the breakwater.


The large number of crab and lobster pots placed close to the breakwater meant that I was limited to fishing off the rock apron to the right of the beacon again, but I wasn't too concerned given my success there last time. Set up a one up, one down two hook flapper baited with mackerel strip tipped with squid on my first rod. Lobbed this out before setting up a pennel rig with a more substantial offering of a mackerel fillet and squid "sausage" on the other.

However, the tip of the scratching rod had already started rattling and I wound in to find a double shot of small whiting on the end. Got them unhooked and popped them into my new Tronixpro "dry feet" bucket (a Christmas present from the kids) to recover. 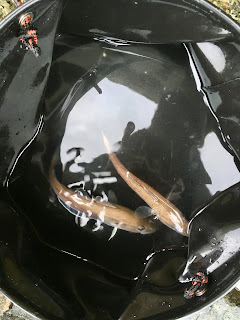 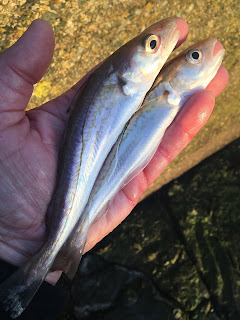 This proved to be a real boon over the session and meant that the seagulls were deprived of any easy pickings! I'd had a few more "pins" when I noticed three positive pull downs on the pennel rod and wound down into a fish. Not the codling I was wishing for, but a feisty little doggy instead. 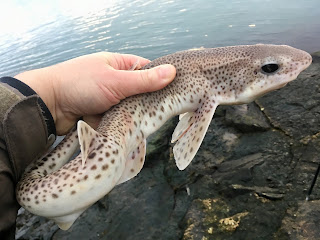 Had two more of these, one on the pennel and one on the flapper, and a few more small whiting in the couple of hours up to high tide, when everything went a bit quiet. The only further action was when I had a pull down on the flapper rod and wound down to feel a passive weight on the end. As I pumped the lead up and over the weed fringe a big edible crab appeared hanging onto the bottom hook......and then promptly dropped off! Packed up and headed back for breakfast against the tide of dog walkers. 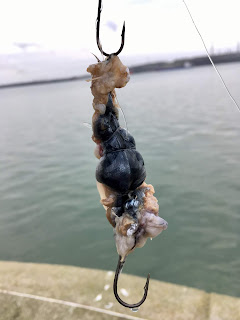 The following morning I was off again before first light down to Milford Haven. I had been in two minds whether to go back to Goodwick, but I'd seen a couple of reports online from before Christmas that suggested there might be a few fish about. Set up out the back of the car about halfway along the sea wall. Tactics and baits were the same as the previous day - the scratching rig close in and the pennel lobbed out as far as I could. Over the next couple of hours I was kept busy re-baiting, but for the wrong reason - flippin' crabs! The little buggers absolutely demolished the fish baits, stripping the hooks on the flapper rig and whittling the bigger bait on the pennel rig down in minutes. Stuck it out for the two hours up to high tide, but with little confidence and the grim realisation that I should have indeed gone to Goodwick! Yet another blank at Milford - the Haven hoodoo continues........
Posted by Toodle No comments: 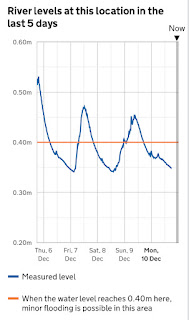 This morning I headed off into deepest Staffordshire for what is becoming a bit of a birthday ritual for me - a day's grayling fishing on a small tributary of the River Dove. River levels were fining down nicely to normal level after the rain at the weekend and, whilst I had to scrape a bit of ice off the windscreen, it promised to be a fine day with little in the way of wind. Set off to find that junction 25 of the M1 was rammed already, so did a quick detour around Derby and was at the venue just after first light. Headed across the fields towards the upstream limit with the usual mixture of eager anticipation and niggling worry that conditions somehow wouldn't be right. However, first sight of the river confirmed that it was running at an ideal level with just a tinge of colour evident in the deeper sections. Club work parties and the river itself had done some "re-modelling" in my absence, but the top pool was as I had left it several months ago. Was soon running a couple of maggots through the swim with the 'pin and third or fourth cast I had my first grayling of the day in the net.

Very next cast I struck into something a lot more solid that thumped a couple of times before shooting off downstream, putting a nice bend in the Ultralite in the process. Managed to stop it and get some line back when the hook pulled out! I couldn't be sure what it was, but hoped it was a big brownie rather than one of the mythical 2lb grayling that I've yet to catch from this particular river. Continued to work the whole pool with the float taking a handful more grayling, including one bearing the obvious scar of a lucky encounter with an avian predator, before moving onto the next swim and starting again. 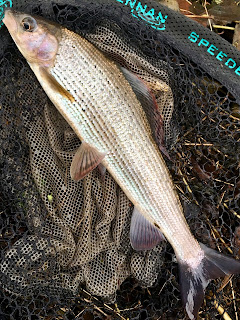 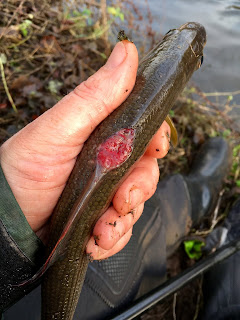 However, despite the seemingly perfect conditions I found it slow going up until lunchtime, adding just a few more grayling and a single chub to the tally. Drew a head-scratching blank in several "banker" swims where I would have put money on fish being in residence and was just pestered by minnows in others. Had the added frustration of striking into another decent fish that felt like a brick bouncing on the rod top before the usually reliable Drennan widegape pulled out. 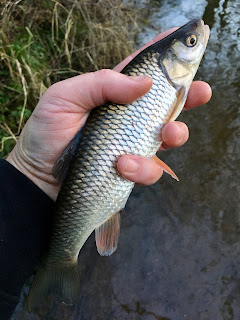 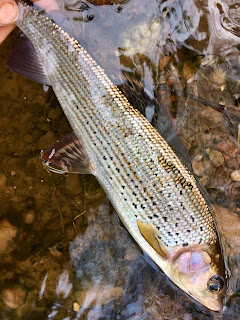 Fortunately, after a cup of coffee and a bite to eat, things started to pick up and I started to drop on some fish in numbers as I continued to work my way slowly downstream. The sun also came out, which was a mixed blessing as it meant I could shed my coat, but made tracking the float in some of the swims a bit tricky in the glare. Ensured that I left myself about an hour of daylight in my favourite pool towards the bottom of the section where I knew there was a chance of a few species other than just the grayling. Stayed there trotting away until it was literally too dark to see the float any more. 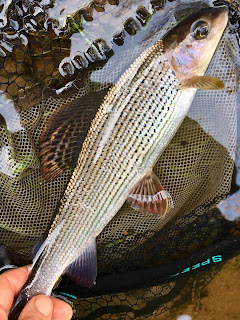 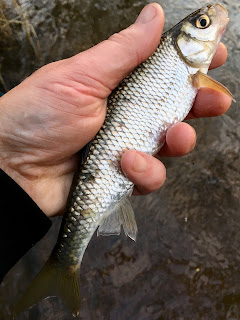 Finished with 45 grayling in a range of sizes up to 35 cm, three dace and a couple of chub. Was frustrated by the loss of two good fish, but it just adds to the mystery of this ever-changing little river and gives renewed hope that there's a two pounder in there with my name on it. That would be a rare and special fish indeed.
Posted by Toodle 2 comments:

My wife had Friday off this week, the benefit of doing "twilight" insets at school, so we took the opportunity to flash down to Pembrokeshire to take some stuff down for Christmas. Whilst the weather forecast for the weekend wasn't brilliant, some fishing gear was thrown in as well, together with two large mackerel and half a dozen squid I'd rescued from the discounted aisle one night at Tesco. 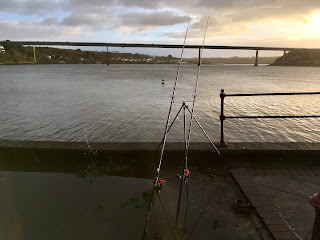 The forecast on Friday morning was for a stiff wind from the west. When the tides were factored in an early morning start on the north side of the Haven seemed a good bet, so I set off for Milford at first light. However, setting up on the sea wall, I'd only been there a few minutes when a squally shower came in and blew the rods off the rest! Throwing everything back in the car I drove the short distance to Neyland marina, where I knew I could tuck myself around the corner out of the worst of the wind. 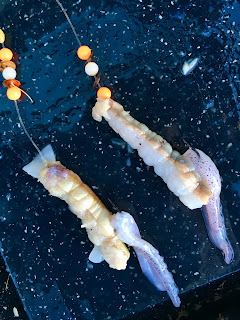 Set one rod up with a mackerel and squid "sausage" on a pulley pennel rig and punched it out into the channel marked by the green and red navigation bouys. The second rod I set up with a one up, one down scratching rig, again baited with mackerel and squid strip "cocktails" tipped off with squid tentacles, and dropped it in a bit shorter where I thought the weed fringes ended. The water clarity wasn't brilliant due to the wind and recent heavy rain, but I thought the baits would be smelly enough to compensate. However, after a couple of hours with no indications on either rod I wound in the scratching rig to find it was locked solid in a snag and had to pull for a break. Also, winding in the other rod I found that the bait had virtually been stripped off the hooks without me knowing. Rebaited the pennel rig and fished on until just before high water, but unfortunately remained fishless.

Was in two minds the following  morning, but when the wife said she was off Christmas shopping with her mum I thought I might as well try again. The wind had switched around and was now blowing from the south, so I got in the car and headed up to Goodwick on the north coast. Walked to the end of the inner breakwater and dropped onto the rock apron to the right where it was marginally more sheltered from the wind and free of lobster pots. Again, fired out a mackerel/squid sausage on a pennel rig on one rod and a scratching rig with squid-tipped mackerel strips on the other. 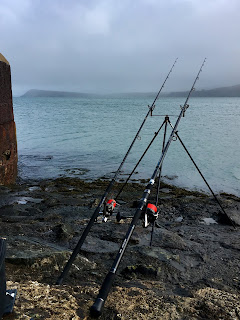 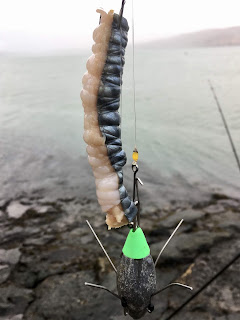 Didn't have to wait long before the scratching rod started nodding away and I was into my first fish of the day - a pin whiting. Soon became obvious that there was rather a lot of these about as the baits were being attacked as soon as they hit the water, resulting in stripped hooks or more mini-whiting. 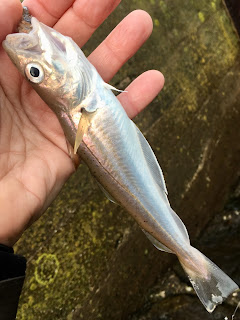 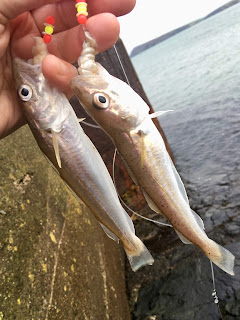 After an hour I wound in the pennel rod and wasn't surprised to find the bait had been shredded by the little, toothy beggars. A small whiting has a big gob so, as well as being able to destroy a sizeable chunk of mackerel in quick time, they were easily getting the baited, size 2 Aberdeens I was using on the scratching rig down their necks. Unfortunately, this made unhooking a bit tricky and at least one expired in the process. Rather than feed the seagulls, I put it to good use and re-baited the pennel rig with it and punched it out again, hoping it would put the others off. Unfortunately, it didn't seem to make much difference as an hour later I wound it in again to find it had been similarly shredded, so carried on with just the one rod until high tide. Packed up having had fifteen whiting in total and made the long walk back along the breakwater a bit happier than the day before!
Posted by Toodle No comments: