Went to meet my mate Dai down near Burton upon Trent to exchange some bait and tackle and have a quick look at Branston Water Park. Was a fairly pleasant evening for once, so threw the lure rod in the back of the car. Whilst Branston pit was low and clear, the canal next door was still coloured up (coming straight off a rain-affected River Trent only a few miles upstream). Decided that I might as well have a go so, after a quick chat with Dai, I drove back the other side of Burton to Stretton. Had thought that the extra distance and a few locks would have dropped a bit of the colour out, but it was pretty much the same. Still had the Texas rig on so, given the poor visibilty, changed the crayfish for a 4" MegaBass Xlayer in pearl. Had a few casts over to the far-bank bushes, bumping it back slowly along the bottom. Had a few knocks, then a proper clonk that resulted in a greedy, little perch. 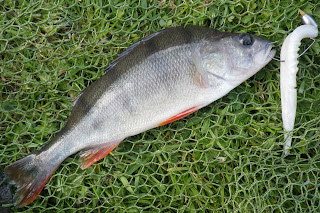 Carried on for a bit, but my confidence was waning in inverse proportion to every minute that went by without another bite. It was finally shattered when a hire boat came speeding along the canal towards me with four blokes on the back, each with a can of Fosters in their hand. The resulting wash churned up the bottom, making the canal even muddier than before. Voiced a quiet word of thanks and set off up the canal after them back to the car!
﻿
Posted by Toodle No comments: