A new rod and a new river. Had been after a Drennan Medium Feeder rod for a while for my small river chubbing. Finally managed to pick up a mint one off eBay for £50. Decided to go and christen it on the Soar. Had bought a club ticket a few weeks ago, but had never got round to using it. Stretch had certainly looked chubby when I went for a recce. Lots of creases and near bank features. 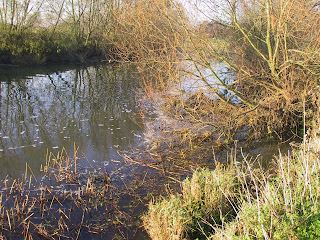 Arrived to find that my colleagues from Fisheries had just been through the section with the electrofishing boat looking for wayward salmon! Not brilliant news, but they had turned up a number of fish of different species and the information was filed away for future use. Had also thrown a load of old loaves in the bait bucket with a view to fishing flake and crust over mashed bread. However, river was still carrying quite a bit of colour. Luckily I had two tins of black pepper spam with me as well. One was chopped up and some freebies dropped in a number of likely looking spots. Left everything to rest while I set up, then worked downstream. First swim drew a blank. Had a few tentative knocks in the second swim, before tip pulled round and I soon had my first Soar chub of 3lb 10oz in the net. 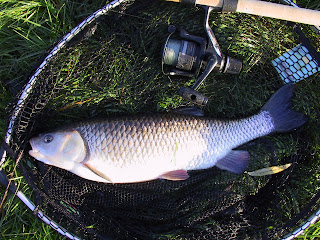 Continued to work downstream, dropping a bit more bait into each swim when I'd finished before going back to the top and working down again. Had four more chub from 2lb upwards before the bait ran out. All fought like stink. Was definitely a refreshing change from sitting behind bite alarms and to have a chub actually put a bend in the rod!

Couldn't let another mild spell go by, so shot down to Draycott after work. River was slightly up, certainly enough to stimulate the few salmon seen jumping at Borrowash weir the day before. Just stuck with the one rod this time and soon had a paste wrapped boilie sitting on the crease. Quiet in the hour before dark apart from when the bailiff made me jump out of my skin when he appeared at my side with a shotgun over his arm. At least his thieving dogs didn't get any of my pellets this time. He'd not long gone when the rod wrapped round. Thought it was a decent fish, but turned out to be a scale perfect 5lber with a tail like a paddle 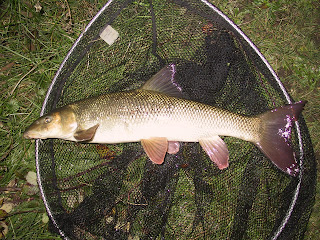 Added a second of similar size about 40 minutes later. Hung on until about 7 pm when the wind and rain finally got to me and the fireworks over Derby were building to a crescendo.