Fitted in a week down at the in-laws before our main holiday in France, so again made the most of any opportunity to cast a bait - both natural and artificial - into the sea. Unfortunately the tides didn't fall kindly to allow any early morning bass sessions on the estuary, so plans were made to hit a couple of local LRF marks and to travel up to the North coast instead. 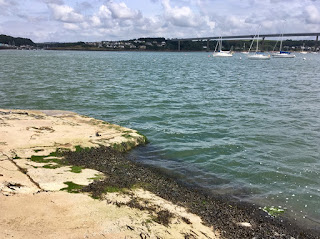 On Tuesday I set off for Pembroke Dock to try and pick up some ragworm from John at Raven Trading. However, the bait delivery wasn't due for a few hours, so I decided to kill time by popping just down the road to Hobbs Point. I got there just before low tide, and found that I was able to fish off the bottom of the old car ferry ramp for a change. Fished my usual scaled down paternoster rig baited with small sections of Gulp sandworm, which proved extremely attractive to the local goby population!

Had a bite a chuck, ending up with fifty rock gobies and half a dozen black gobies, with the odd ballan wrasse and pollack thrown in before it was time to head back to the shop a couple of hours later. 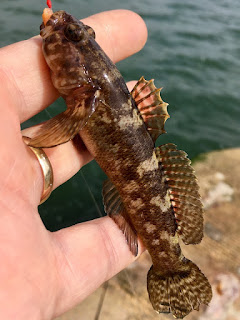 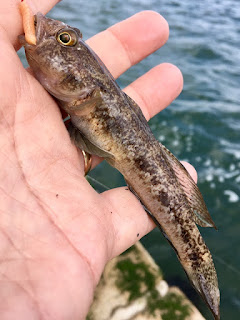 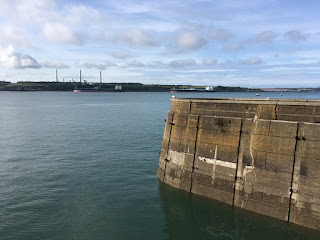 The following morning I was up bright and early to catch high tide down at Milford Haven armed with my pack of ragworm. Fished off the "bull nose", dropping my paternoster rig baited with small pieces of worm straight down the side of the sea wall. Like the previous day I was soon into a procession of fish, but this time the area seemed to be absolutely snided out with little corkwing wrasse, a fish I never really tire of catching as the colourful males are the nearest we have to a "tropical" fish.

By the time my bait supply had been exhausted I had amassed 30 corkwings, together with a few ballans, shannies and pollack. Dropped into Angler's Corner on the way home to see if I could replenish my bait stocks and had a useful chat with the very friendly and helpful Martin and Sandra, before reserving a pack of rag for the following day. 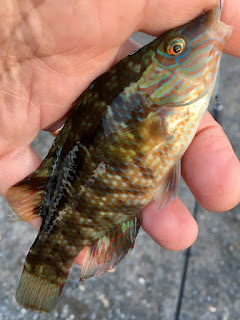 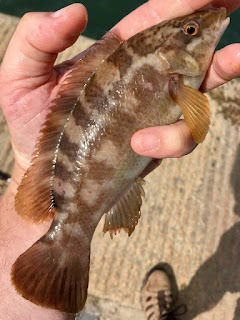 The next morning I returned to Milford Haven, firstly checking out the access to a couple of potential low water marks on the Hakin side of the docks, before returning to the bull nose. Fishing with bits of Gulp sandworm I found it much harder going than the previous day and had to scratch around in several spots to find the fish. Again, there were were a few corkwings about, along with some rock gobies, shannies and pollack. The fishing slowed right down about two hours after high tide, so I packed up and went and picked up my ragworm, taking the opportunity to pick Sandra's brains about LRF marks once more! 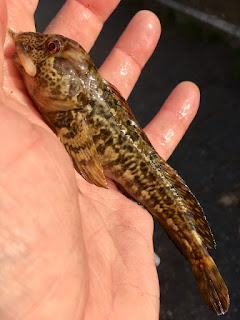 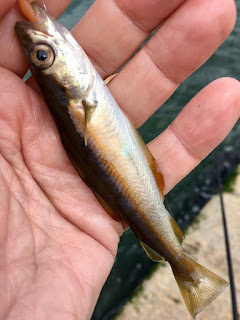 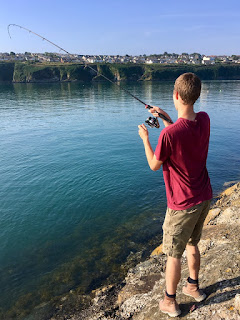 On Friday the tide times had advanced sufficiently to allow a trip up to the North coast for a session with the lad off the inner breakwater at Goodwick. Arrived two hours before high tide with the intention of fishing about an hour into the ebb. Walked to the end of the breakwater to find a grey seal cheekily hauled out on top of the lobster cage and it wasn't long before another one popped up to give us the once over before swimming off into the bay. Undeterred by the competition we set up three rods - a squid and mackerel sausage on a pennel rig and a one up, one down rig baited with fish strips were cast out into the bay and a two hook flapper baited with rag was cast parallel to the breakwater. It was a brilliant, bright morning and we were soon both cooking on the rocks as the sun rose higher. Bites were slow in coming, but we eventually had a brief flurry of activity on the rod cast down the side.


This resulted in four ballans, a corkwing and a pollack. Wound the pennel rod in to find that the bait had been competely demolished by the crabs. Didn't bother putting this one out again, but instead swapped the bait on the other rod to ragworm as well. It was this one that tempted our last fish of the morning, another ballan, before we packed up and headed for the cafe for a bacon butty and much needed drink. 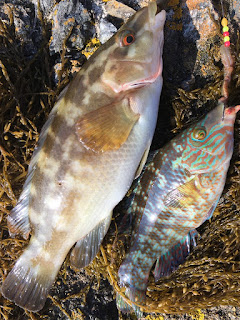 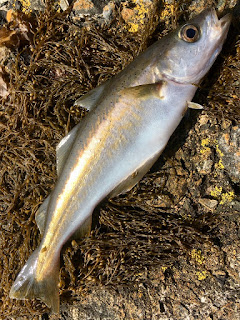 Was in a bit of a quandry over our last session. With the sea slowly clearing over on the East coast a shot at some garfish at Saundersfoot looked to be on the cards, but a freshening breeze from the South saw us heading for Hobbs Point again for high tide. Wasn't in much doubt that we would catch gobies - lots of them - so a dad vs. lad match was proposed, with James electing to use Gulp and me using the manky remnants of the ragworm. Setting ourselves a maximum of an hour we had bites from the off. It was nip and tuck, but when the whistle blew we'd both had 21 fish consisting of rock gobies, corkwings (they seem to be everywhere at the moment!) and pollack. Suspect that natural bait would have edged it if it hadn't been for the time lost re-baiting. However, I wasn't complaining seeing as he'd thrashed me the last two times we'd had a similar competition!

Didn't get much variety over the week in terms of species, but the numbers of fish caught made up for that and, whilst Nottingham had been deluged with rain, we'd had some glorious weather. See you again soon!