Arranged to meet Tim on the Trent and Mersey Canal for hopefully another mixed predator session. Finished my chores, cooked and ate Sunday lunch with the family and was away down to Burton by late afternoon. Arrived just before 5 pm to find our usual spot vacant. The canal was carrying quite a bit of colour and floating debris, not suprising given the Trent was up again, but things looked hopeful for the zander at the very least. Tim arrived a few minutes later and we soon had four deadbait sections spaced out along the far margin. Had toyed with the idea of going down the route of mini snap tackle to sort out those pesky little zeds, but didn't fancy the idea of leaving a set down a big perch's throat or the consequences of hooking something big, so stuck with the size 6 Korum S3's. My left hand rod was the first to go, resulting in a perch of about a pound and a half. Tim was away next, cranking in what he believed to be a small jack until a big perch rolled on the surface causing a squeaky bum moment! Turned out to be another cracking canal specimen of 2lb 11oz (first glance at the line pattern and split anal fin seems to indicate it was a different fish to the one I had two weeks ago). 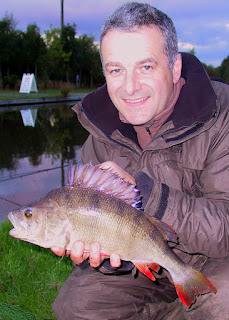 That's not a jack, Tim!
﻿We both had a couple of missed runs as it got dark before I landed the first zander of the night - less than 1lb of it! Tim then pitched in with a pike of about 9lb. Soon became obvious that it was not going to be as frenetic as my previous trip with just two more zander, biggest about 2lb, falling to my rods over the next couple of hours. Tim had actually started packing up about 9 o'clock when I had another twitchy run on a roach head. Again, it was a case of mistaken identity as the weight but lack of any real fight led me to I believe I had a decent zed on the end. Was therefore a bit suprised when a pike popped up onto the surface and was bundled into the net and onto the bank by Tim (where it promptly woke up!). Was a short, but very broad and solid fish of 13lb 12oz - the first canal double I've had for a very long time. 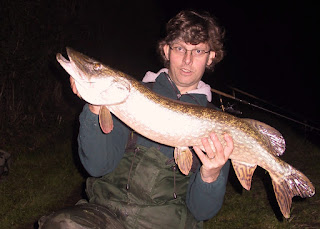 And that's not a zander!
﻿Whilst it had been a lot quieter than the last trip I was pleased to sneak in a predator "treble" again, particularly with an enforced break coming up (well that does include a week in France, so not all bad!).
Posted by Toodle No comments:

Indulged in a spot of "smash and grab" lure fishing as advocated by fellow blogger Lee of "This Angling Life". Dropped in on the Soar near Sutton Bonington on the way home from a meeting to find a group of lads just packing up after fishing all day on the pole. One of them mentioned that he'd had pike trouble in his swim and that I should try there, so didn't need a second invitation. Was soon casting a Storm wildeye roach over to the far bank and working it back across the river. However, the first take when it came was right under my feet as a pike shot out from the marginal reeds and completely gobbed the lure. Led me a merry dance on short line, uprooting cabbages as it did so. 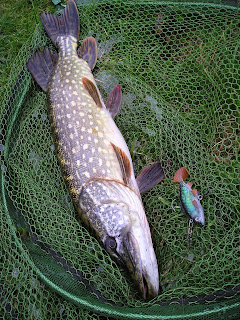 Feisty!
Moved down to the next swim and cast the lure down the edge of the weed to my left. Had an immediate take from a slightly smaller, tail-walking pike that again put up a good fight on my light gear. Would have stayed a bit longer, but it had started raining quite heavily and it was getting uncomfortable, so headed back to the car. On the subject of lures, I'm eagerly awaiting the arrival of some Savage Gear real eels (read fellow blogger Paul Bosworth's review here http://riverpiker.blogspot.co.uk/2012/08/savage-gear-real-eel-review.html), so will be trying them out somewhere soon.﻿
Posted by Toodle No comments:

The specimen hunter's lament probably goes along the lines of "so much to fish for, so little time" (thanks for that, Rob!). My own fishing time is certainly at a premium, so I try and plan with military precision where, when and what I'm doing next. The fact that the Trent was still too high for a return to Swarkestone therefore put me in a real quandry. Go back to the Soar at Kegworth and have another bash there, follow up a lead into some big perch from a different section of the river or have the first session of the year after some canal zander? In the end I opted for the latter so, after a pleasant pub lunch with the wife, I set off to the Trent and Mersey Canal near Burton.

Was nobody else on the section when I arrived, so soon had two hair-rigged deadbait "chunks" out in the prime spot. Some kind person had even cut the grass, which meant I didn't have to do any gardening around the rods. The downside to this was that you could smell the dog mines but you couldn't see them! Had to play hokey cokey with a few boats to start with (including an idiot in a hire boat that did a 10 point turn in the swim, making full use of the piling on each bank!), but the traffic soon fizzled out. First run came while it was still full daylight. By the feel of it I was expecting a zed to pop up. However, it turned out to be an absolute mint perch of 2lb 10oz (look at the fins and the hump on it!). 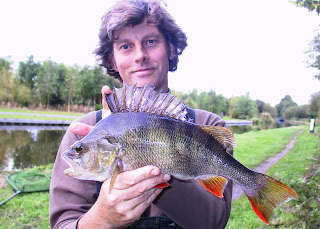 Predator No.1
As the light began to fade the action began in earnest as the bobbins started twitching and jumping. However, turned out to be most frustrating. Lost count of the number of times I watched the line peeling off the spool, picked up the rod then either struck into nothing or bumped off a fish. Didn't think it was going to be my night. Eventually had two almost simultaneous runs and somehow managed to hook and land both fish, one a pike of about 7lb and the other a zed of less than a pound. Suspect it was these little pests that were giving me all the grief. However, with full darkness a shoal of better fish must have moved into the area as I then had three over 3lb in quick succession, best going 4lb 8oz. 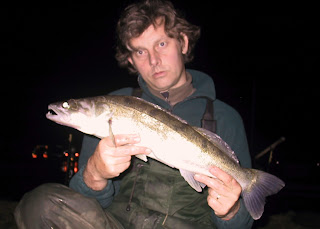 Predator No.2
Was back to being frustrated by the little zeds after this, although last fish turned out to be a nocturnal, tail-walking pike (had missed the bite alarm with the line in the dark on the previous cast, so only noticed I'd got a run when the baitrunner went into meltdown!). Not quite a canal double, but at 9lb 13oz it was a good way to finish the session.
﻿
﻿
﻿ 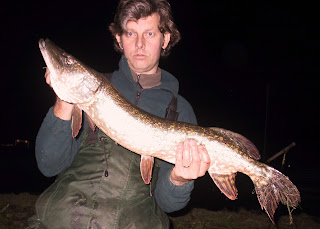 Had been champing at the bit to get back to the Trent last week, but work and the wet weather conspired against me. Had therefore been watching the river levels dropping over the weekend with a view to getting out after work. Unfortunately it was a bit too soon for the Trent, which was still too high, so headed for the River Soar near Kegworth instead.

Found a swim at the deeper, slower end of the section that offered a bit of shelter from the blustery wind and applied "the method". Soon had bleak, roach, dace and small perch crawling up the float rod and was able to put the paternoster down the side of a bed of whips. Didn't have to wait long before it was away, but turned out to be the wrong species. 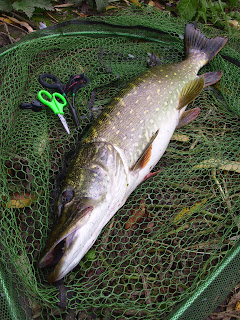 Not you again!
Dropped in again and a bit later a stuttering, drop-back resulted in a micro-jack that had done well to get the whole bait in its gob. A move downstream into a small bay saw another one of the little pests snaffle another bait. Despite a final move into the best looking spot on the section, that proved to be the last of the action.﻿
﻿
Posted by Toodle 2 comments: