Phoned Bridge Tackle at Long Eaton this afternoon to find that the maggots were fresh in, so jumped in the car to get the fattest, liveliest pint of mixed I've ever seen. Half an hour later I was pulling on my chest waders in the club car park next to the River Derwent near Draycott. 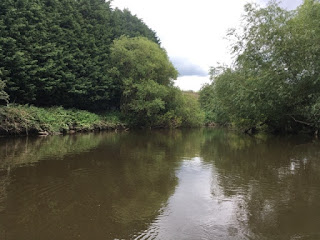 I've fished this section over the last couple of winters for the grayling, but was keen to find out what else was about, so headed upstream with just my float rod, landing net and a few bits in the bag. Aimed for the same spots that I'd fished for the grayling, figuring that any summer species would also be in the pacier, aerated swims. Obviously the river was a lot lower than in the winter, but the other thing that struck me was that there was a definite tinge of colour (I was more used to it being more like tap water!).


Popped on the bait apron and waded out into my first spot so that I'd be trotting down in about 3 feet of water. Hadn't realised that my chosen swim was directly opposite one of the testing bays at the local "cracker factory" where they make pyrotechnics for the armed forces, so when the first explosion went off I nearly jumped out of my skin! Fortunately it didn't last too long, although as the smoke subsequently rolled across the river it made me think of "Apocalypse Now". However, instead of Martin Sheen it was a mink that appeared out of the river, had a quick shake and then disappeared into the undergrowth on the far bank. Anyway, first trot down the float buried and I felt the familiar bonkers gyrating of a grayling on the end - not really what was expected, but nice to get off the mark straight away. Second trot down  the float was away again, this time resulting in a small chub. 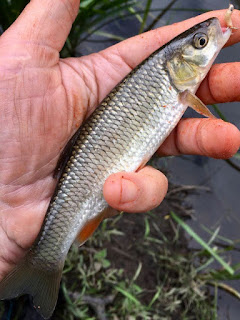 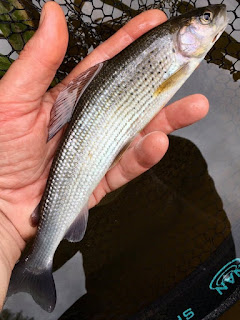 Added dace, perch and some hand-size roach to the tally before a horde of chub fingerlings moved in and started reducing my hookbaits to empty skins on every cast. 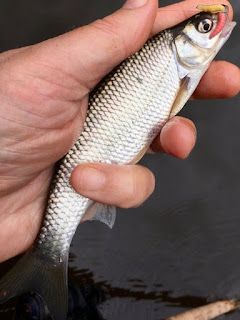 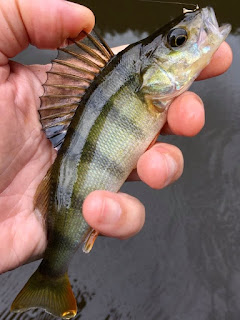 Two big maggots on a size 16 Kamasan Animal didn't put them off and the loose feed just seemed to attract more into the swim, so I decided a move was in order. 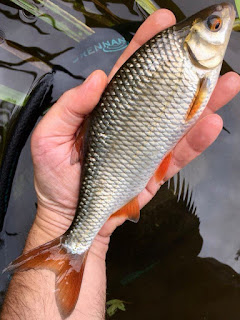 Again, I dropped into a swim that I'd fished in the winter, now heavily overgrown with Himalyan Balsam. Was immediately into fish and had more roach, dace and grayling before the ravenous micro-chevins turned up and started making a nuisance of themselves. By this time three hours had absolutely flown by and I was conscious I had to be home to make dinner, so I made my final move to a pacier swim upstream of a pipe bridge, still festooned with the debris from the Spring floods. Was therefore surprised that my first fish was another decent roach that scrapped away gamely in the flow. More dace and another grayling followed, although it wasn't long before the float was bouncing and dancing down the swim as the hookbait was harried downstream. Therefore had a few more casts before waving the white flag and packing up, happy having caught a decent bag despite being plagued by tiddlers.


Having not caught a single silver fish over the previous winter it was good to see the head and variety of fish present, not least the roach. Makes you wonder where they disappear to!  I think a return visit for a longer session will be on the cards soon.
Posted by Toodle No comments:

Spent the best part of two hours locating and patching holes in my waders after my last trip ended in wet feet, to the extent that they were nearly more patch than wader! Happy that they'd do the job for at least one more trip I went back over to see Scott again at Soar Tackle for some maggots. Unfortunately, I got there a bit late in the day and he'd virtually been cleared out, so had to make do with what was left in his fridge - a mixture of bronze and whites. However, I was sure that the fish weren't going to be fussy and as long they still wriggled I didn't mind! A couple of days later I was again back in my spot on the River Soar near Kegworth for another evening session. 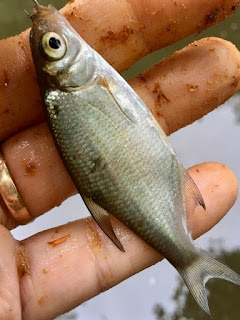 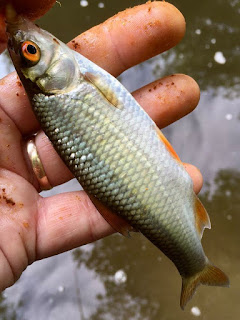 It had been raining most of the day, so I wasn't surprised to see that the river was slightly higher than previous visit and that there was a bit of colour in the water, but I looked on this as a positive. Soon had the Ultralite set up and was running a stick float down the crease again.The ravenous hordes of bleak were initially absent and I picked up roach and a couple of small skimmers on the first few trots down. 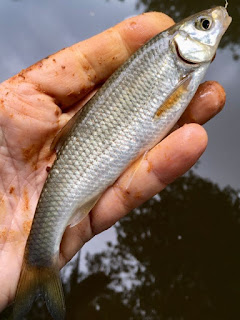 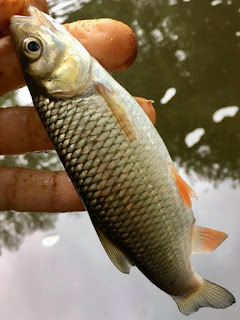 However, wasn't long before the bleak, dace, chub and the odd, fat minnow turned up, attracted by the loose feed. I'd brought the perch paternoster rod with me this time, so one of the bleak was swung out and positioned at the tail of the swim, hopefully to attract something large and stripey. 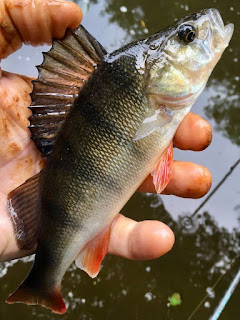 My friends on the island failed to turn up this time, so I was able to carry on trotting away undisturbed. Turned into another "fish a chuck" session as I carried on catching until the light started to fade and I started to struggle to see the float any distance downstream in the gathering gloom. Unfortunately, the only perch had come to the float rod and I was just thinking of getting the paternoster in when the rod tip banged down forcibly a couple of times and the line pulled out of the clip. However, wound down to feel a weight that was far too heavy for a perch, which was confirmed when a green and gold rocket went airborne. After a few more acrobatics I bundled a pike of about 7lb into the net, hooked nicely in the scissors by the size 6 Gamakatsu circle hook that I was trying out for the first time. Toyed with the idea of putting a rod out for an hour into dark for a barbel, but decided that I couldn't wait for the swim to settle down again.

Besides, I was getting hungry and had obviously missed a hole in my right wader as I had a wet foot again. Needless to say, after having to squelch back to the car again, the first thing I did when I got home was to consign said waders to the bin, perhaps where they shoud have gone in the first place! 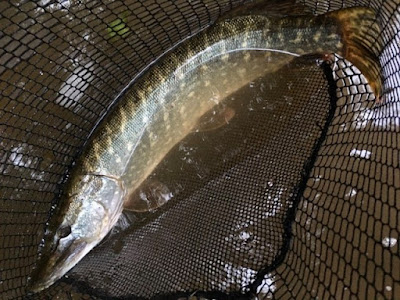 Expect I'll get a few more of these float sessions in as I've not really got a "big fish" bug yet and am quite enjoying catching a variety of species. However, perhaps a change of river will be on the cards for next time? We'll see...
Posted by Toodle No comments: