With the mild weather continuing, another trip to the canal had to be on the cards. Went with some new rigs this time to try and get to the bottom of those "unmissable" runs. My usual approach is a hair rig using a size 6 single. However, rummaging in the garage, I managed to find some small, but very strong and needle sharp Partridge outpoint trebles. Coupled with a supple wire trace in a sensible breaking strain I felt confident that they'd cope with any bigger fish, i.e. pike, that came along, so made up a couple of snap tackles to try on one rod. Got down to Burton shortly after 6 pm and soon had the rods out, hair rig on the right and snap tackle on the left. First run came on the right hand rod when it was still light. The manic head thumping indicated a perch. Not quite 2lb, but a good start. 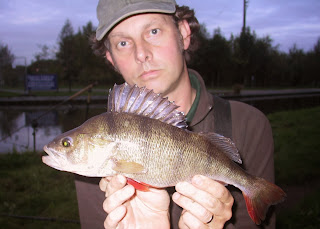 Rather surprisingly dusk came and went without any action and it was fully dark before the left hand rod was away, resulting in a micro-zed of about a pound hooked on the bottom treble. If that had been on the hair rig I would have struck into thin air! As if to prove the point, I missed a run on the right hand rod before the left hand rod was away again, resulting in another zander not much bigger than the last. A long quiet spell followed before two better zander showed up in quick succession on the right hand rod. 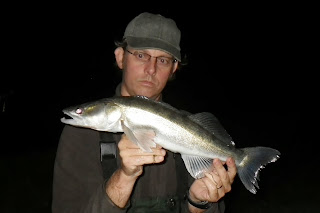 Packed up at about 9.30 pm having had two runs with a 100% hookup rate on the snap tackle, compared to four runs and 75% on the hair rig. Not very scientific, but at least I know what was responsible for those unhittable runs. Also, the bigger zander and the perch (and the pike last week) were all hooked firmly in the scissors by the single hook rig, so guess I'll stick with that and just put up with missing a few small fish now and then.
Posted by Toodle No comments: 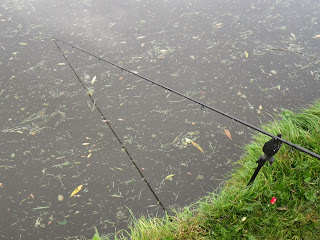 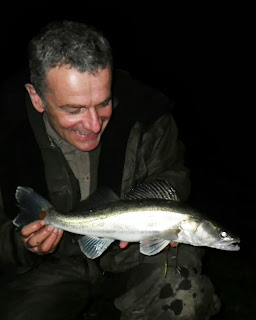 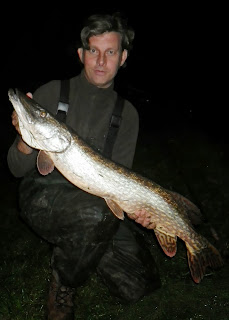