The weather forecast - freezing overnight, then cold and sunny during the day - was probably better suited for another grayling session but, as I only had half a day off work, the drive over to Staffordshire and back wasn't really an option. 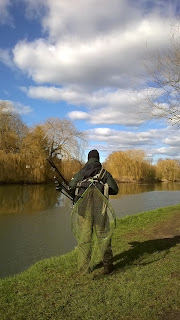 The cold light of dawn instead found me standing on the bank of the River Soar with a few pike in my sights. I'd had bumper day last season in similar conditions, so I was hoping that the fish would be similarly co-operative. Whilst I'd already had quite a few pike to mid-doubles this season whilst out perch and zander fishing, this was actually my first proper pike session of the year! It was also the first opportunity I'd had to try out the present from the wife for my birthday in December- a Korum ruckbag.

Had the whole section to myself when I arrived and, apart from passing one jogger and one dog walker, that's how it stayed all morning. Walked upstream to my starting point and, with the rods still made up from my last session last season (!), soon had two float-legered deadbaits carefully placed in the near margin. Experience has previously shown that it's always worth trying close in early on while it's quiet and so it proved again. The upstream float was first to show signs of life and I was onto the rod before the line had even tightened to the drop-off. 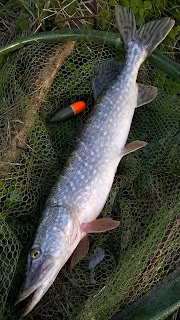 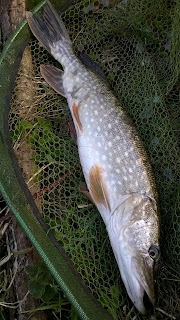 After a bit of dithering about the float eventually moved off and I wound down into the first fish of the session. The offending jack didn't put up much resistance and the healed scars on its tail looked as if it'd had a run in with a bigger fish at some stage in its life. Popped him back, retrieved the only-slightly-mangled smelt out of the landing net and swung it down the side again. Within a few minutes it was off again, the float plunging away confidently this time. However, just turned out to be another, albeit slightly bigger, turbo-charged jack. Had another one on the downstream rod before it went a bit quiet and I moved one of the baits over to the far bank. The reaction was almost instant, the float popping onto its side before heading off towards a moored boat. However, the strike met with nothing. Popped the bait back over only to have this happen twice more, with slash marks on the lamprey evidence that something had managed to pick up the bait whilst avoiding the hooks.

There seemed to be a few fish over on the far bank, so both baits were sent over as close to the moored boats as I dared without incurring the wrath of the owners, who were beginning to stir and go about their morning business. 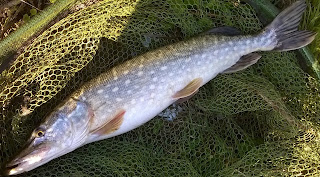 This included one lady who gave me an eyeful when she drew back the curtains of her houseboat dressed in a skimpy nightdress. Unfortunately, she looked like Nora Batty, so I pretended to have a keen interest in the plane flying overhead at that point! Had three more runs in quick succession. Thankfully all of these stuck, albeit resulting in yet more bait-scoffing jacks.

The rigs on both rods were in a bit of a state by now, so I had a short breather and replaced the now pig-tailed traces. Put fresh joey and lamprey baits over to the far bank again, but the action seemed to have died a death. A stiff, upstream breeze had picked up by now and it was hard to keep track of the floats as they kept getting pulled under by the drag on the line.

Brought both rods back into the near margin, casting the upstream one a bit further towards an area where I'd seen one of the "black death" regularly diving and coming up with the occasional unfortunate silver fish clenched in its beak. 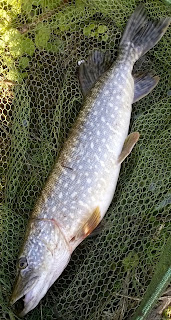 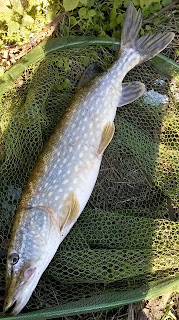 Didn't have to wait long for this upstream rod to go off, resulting in, yep, another jack. However, rather than heralding another burst of activity, it all went very quiet again. With my time running out I upped sticks and moved a couple of swims closer to the car to see if I could sneak a decent fish at the death. Whilst the upstream float duly obliged by slowly waddling off, it wasn't the pike I was after. Packed up and headed back to the car. So no biggies, but the little 'uns kept me busy at least. I was pleased with the ruckbag as well - plenty big enough for the type of sessions I do, comfy to carry and the design makes everything really accessible. Just hope I get to use it again before the end of the season!

As the title suggests, sometimes it's the humbler, or lesser, species that rescue a session and that certainly was the case today. A few days down in Wales meant there was an opportunity for the first LRF trip of the year. Picked the nicest day weather wise, although that still meant chipping ice off the car windscreen in the morning. Temperature was minus 2 degrees Centigrade when I set off and, although it had crept into the positive by the time I go to Hobbs Point, it then decided to chuck it down! 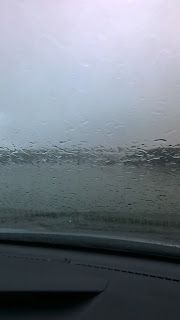 Sat in the car park, peering through the window at the near-invisible toll bridge, and waited for the rain to pass. I'd arrived just before low tide so, a soon as it was dry, I made my way as far as I could down the ramp, stopping before the algae made it too slippy underfoot. There was a bit of colour to the water after the rain of the last few days and still quite a flow towards the sea given it was slack water so, all-in-all, not brilliant conditions. However, had got some artificial baits (Gulp Angleworm and Sandworm and Marukyu Isome), together with a few raw prawns, so felt I could scratch something out. Dropped my rig straight down the side of the wall, felt it hit the bottom, and then just gave it an occasional lift. Had a couple of rattles before I had a proper bite and my first fish. Not really surprised it was a goby as they are greedy little gits! 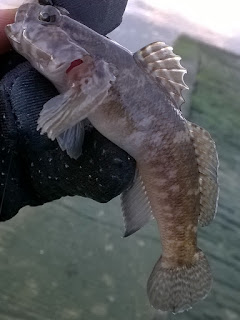 Several more followed the first and, whilst there was quite a variation in size and colour, they all appeared to be the more common (certainly at this venue) rock goby. 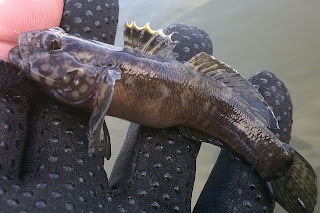 Whilst the sun made a appearance and warmed my back up briefly, it was pretty exposed stood on the wall. After about an hour I'd begun to shiver and my nose had started that uncontrollable slow drip! However, despite the conditions I'd managed to chalk up a dozen fish, which was probably more than I was expecting when I arrived. Gave myself one last drop down the side for yet another obliging rock goby to "gob" a lump of raw prawn. 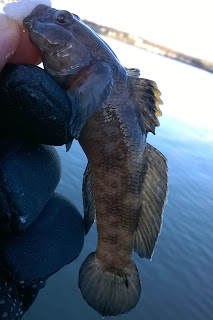 Packed up and headed to Lidl for some much-needed carbohydrates in the form of two Danish pastries, scoffing them in the car park with the heater on. We're down again in April, so hopefully it'll be a bit warmer and there'll be a few more species about. However, I was certainly grateful to the gobies on this occasion! ﻿
﻿
Posted by Toodle No comments:

Had already missed two good windows of opportunity to head over to Staffordshire for another grayling session, so grabbed this one with both hands. I knew it was going to be windy, but the river level had come down nicely and I was sure that I could find some sheltered spots. Unfortunately, I was halfway to the venue when I realised that I'd not got my favourite beanie. Not wanting ice cream head all day, the problem was solved by cutting off the arm of an old gardening fleece I had in the car - instant snood! Decked out in my unconventional headgear I stomped across the still sodden fields to the river, which was still carrying a bit of water, but which was nice and clear. Had a couple of casts in some new spots, but they weren't really doing it for me and I felt myself drawn to what was becoming one of the "bankers". First trot down without any loose feed and the float disappeared at the tail of the pool. It was obvious that the wind was going to be a pain, gusting all over the place, holding up the float and periodically tangling the line around the back of the 'pin. The low sun wasn't helping either, the surface glare making it difficult to keep track of the float as it meandered down the swim. The first few spots weren't really as prolific as previously, with just a couple of obliging fish in each one. However, this did include a nice plump hen fish, my first one over the pound mark. 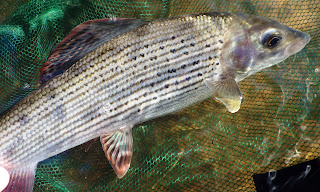 Soldiered on and by mid-day I'd had a dozen fish and had just got to the swim where I'd bagged up last visit. I was somewhat surprised to see another member fishing there and even more surprised to find out that he was drop-shotting with live worms, which I thought was a bit cheeky given the water has a legering ban! Had a chat and found out he was actually after perch and chub, but was yet to have anything. Gleaned some useful information off him before he set off upstream from where I'd just come. Sat and had my lunch and rested the swim, before dropping into it myself. Had a couple of small ones, followed by a nice male over the pound mark, just as my fishing companion re-appeared from upstream. Had another chat and he confirmed what I'd already been thinking. He'd fished the river for many years, caught lots of grayling, but had only caught one over two pounds in all that time. 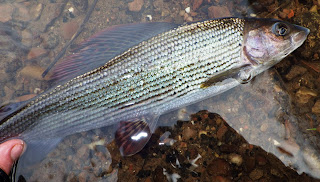 After we parted ways I carried on downstream, taking a few more, including another nice male out of the "snag swim" - the tight, little spot I'd discovered on my first trip last year, made even tighter by the addition of a flood-borne tree trunk. 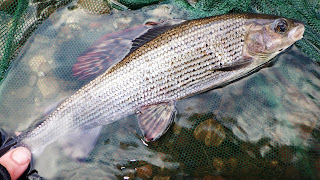 By three o'clock I'd come to the big pool where I'd had a couple of chub. Decided it was too late to have a look at the downstream section (that'll have to wait again!), so set up camp for the last hour or so. Got into the rhythm of trotting through the pool, feeding a few grubs every other cast and periodically hooking into a fish - no chub this time, but more grayling and a single out of season brownie. 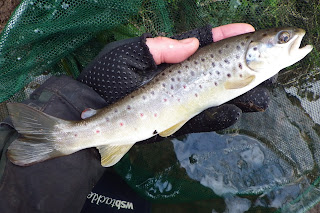 The session naturally came to a close when I snagged up at the tail of the pool and snapped off above the float. The weather had turned showery so, rather than re-tackle, I headed back to the car and fired up the stove for a coffee. I'd had one trout and 27 grayling, with three fish over the pound, quite a pleasing result given the battering I'd had from the wind all day!
Posted by Toodle No comments: