Was a no-brainer that I would go fishing today given the rise in temperature and drop in the wind. Decided on another pike session in the hope that the "big girls" had started to stir, so headed for the River Soar again to the site of my recent "jack-fest". Got there for first light and was suprised to see a van at the end of the lane. Luckily the two occupants had taken the easy option and had dropped into the first swim downstream. Had a quick chat. One of them had fished there a few times, but had not had anything decent. However, he did say that his "mate" had caught a twenty last season "that he didn't weigh" - okaaay! Left them to it and walked upstream to my usual starting point. Put both baits out in the channel and sat watching the fish topping between the boats. Didn't have to wait long as the downstream rod soon trundled off, resulting in a little 'un of about 5lb. The fish came regularly after that, taking everything I threw at them - roach, mackerel, smelt and lamprey. The biggest of the day, a short, fat fish possibly scraping 9lb, gave a good account of itself and provided some entertainment for an old boy at the marina on the opposite bank. When I got it in the net he gave me the thumbs up and then asked me what kind of fish it was. It just suprised me that somebody who obviously spent a lot of time next to the water didn't know what a pike looked like! 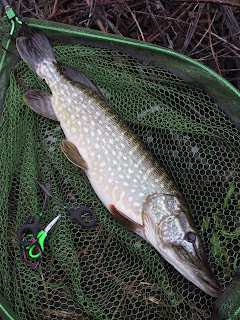 Know your fish #1 - The Pike
Finished at mid-day having had ten runs and landing 8 fish. That's 19 in four sessions, but still no double! Can't help feeling that if I want a biggie before the end of the season I'll have to think about going somewhere else.
Posted by Toodle 4 comments: 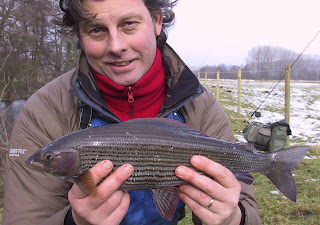 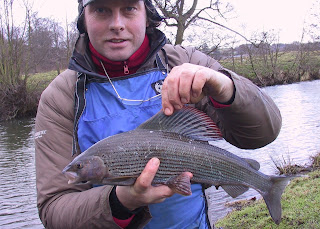 Beauty!
Again, the fish was in absolutely mint condition, but it looked even better back in the water with the big dorsal up at its fullest extent. Tried a few more spots, but the river had started to colour up quite markedly, the result no doubt of snow melt. Decided to quit whilst ahead and headed home, leaving the now green hills of Derbyshire behind me.﻿
Posted by Toodle 6 comments:

Two weeks without fishing and I'm getting jumpy at the prospect of losing any more time to work and to the weather. At least the flexi is building up nicely! Fingers crossed and weather permitting, have got a grayling trip in the offing next week, so was knocked sideways when I was sent the picture below by a friend this week. 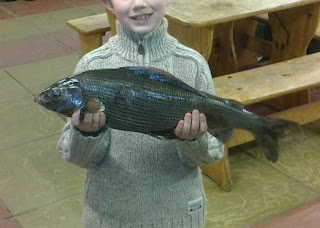 Blimey!
Photograph shows a 3lb 10oz grayling taken from the River Clyde recently. That's nearly twice as big as my PB. It was caught (and clonked unfortunately!) by the little lad holding it. Even taking into account the fact he's only eight, the fish still looks huge. Oh well, gives us all something to aspire to!
Posted by Toodle 3 comments: