Had booked the day off with all sorts of fanciful notions of it being a multi-venue, multi-species affair. However, an incident at work meant that I didn't get to the tackle shop as planned and was too knackered to get all my stuff together from the four corners of the shed, garage and attic. Instead, I cobbled together as many dead baits I could find from the freezer, grabbed my pike gear and headed out into the freezing, foggy darkness. Was just about getting light when I got to the venue and walked up the towpath to the same area I fished a couple of weeks ago. Stuck to my vow of "don't ignore the margins" and duly stuck a rod down the side, along with one on the far bank in the crease formed by the back end of a houseboat (the old dear that lives there must love the sight of me when she opens her curtains in the morning!). Clock had just ticked around to 7 o'clock when the near bank rod set off. Hit it and felt some weight. Turned out to be a short, but very fat fish that, at 10lb 7oz, was my first double from that particular section of river (after eight sessions and forty fish to be exact!). 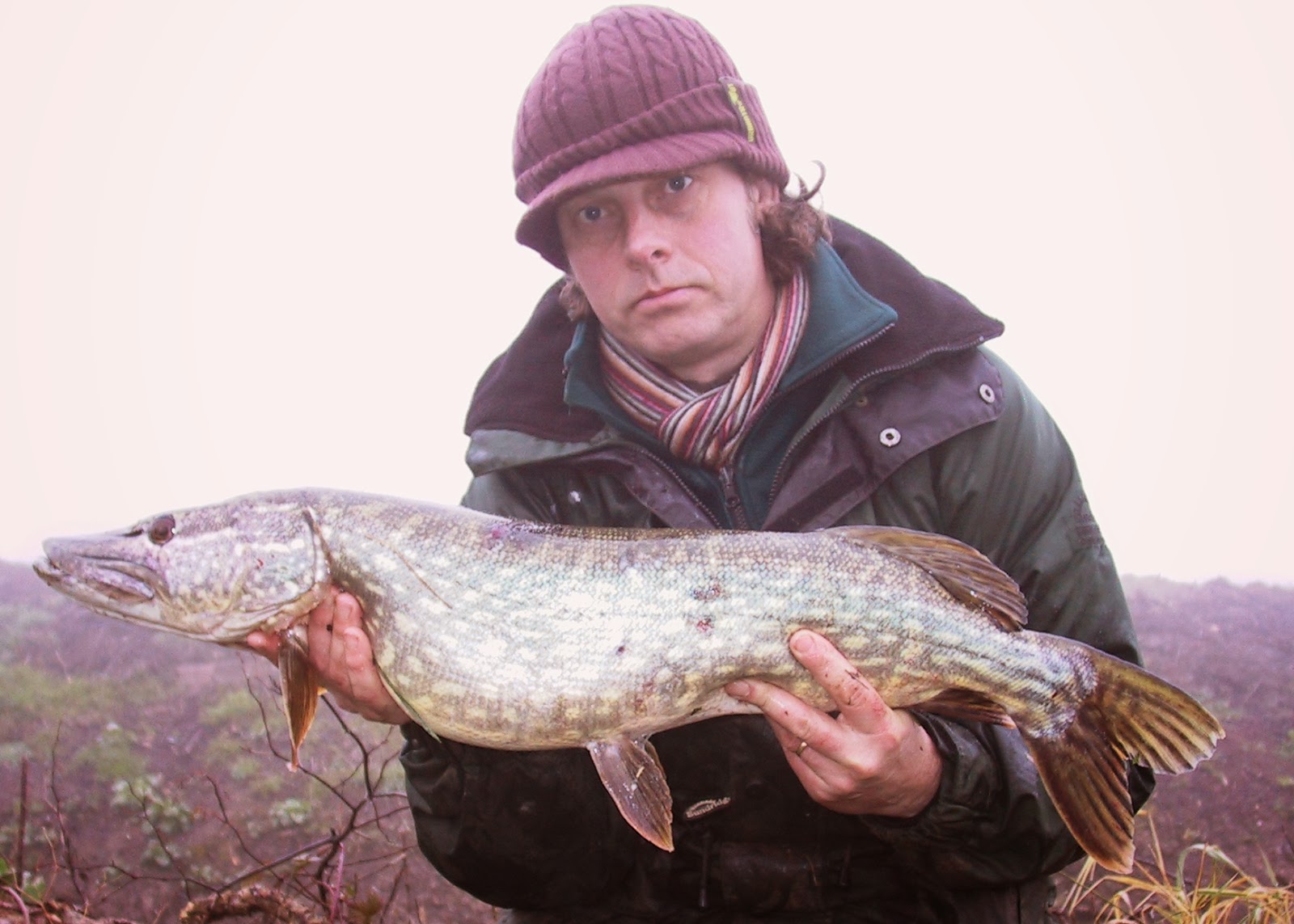 A double at last!

Re-baited with another joey and dropped it in the same spot. A few minutes later that trundled off as well resulting in one about 8lb. Sorted that one out and was just thinking that it was time the far bank rod saw some action when the float started to head off towards the boats. Unfortunately, it was back to one of the run of the mill jacks this time. Moved upstream after these fish and had a couple more on the same bit of lamprey, again from the far bank. The fog had started to lift and I could just make out figure in the gloom at the sat at the end of the access road (was that you, Leo?), otherwise I still had the section to myself. Things then went a bit strange as I had three dropped runs and completely failed to connect with a fish that steamed off with a lamprey section. Had to wait a good hour for the next one, but at least it made some old chap's day for him as he stopped for a chat. He said he'd never seen anybody catch anything before and insisted on taking a photograph to show the wife! The sun had finally broken through by now, burning off the remains of the fog and forcing me to shed a layer. 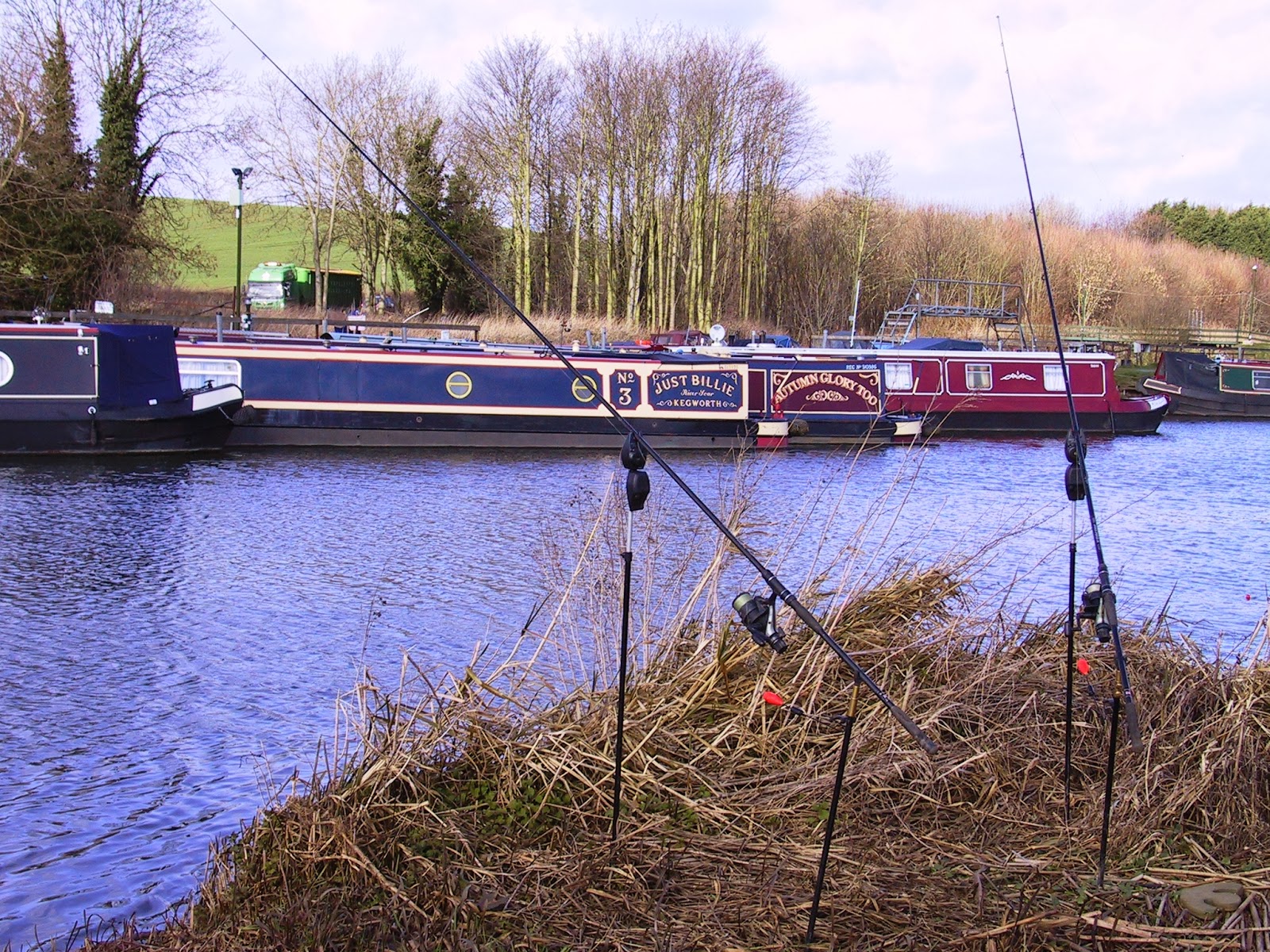 Was down to one roach dead bait at this stage and was thinking I'd had it for the day when the drop off smacked the rest on the near side rod as the float disappeared without any prior indication. 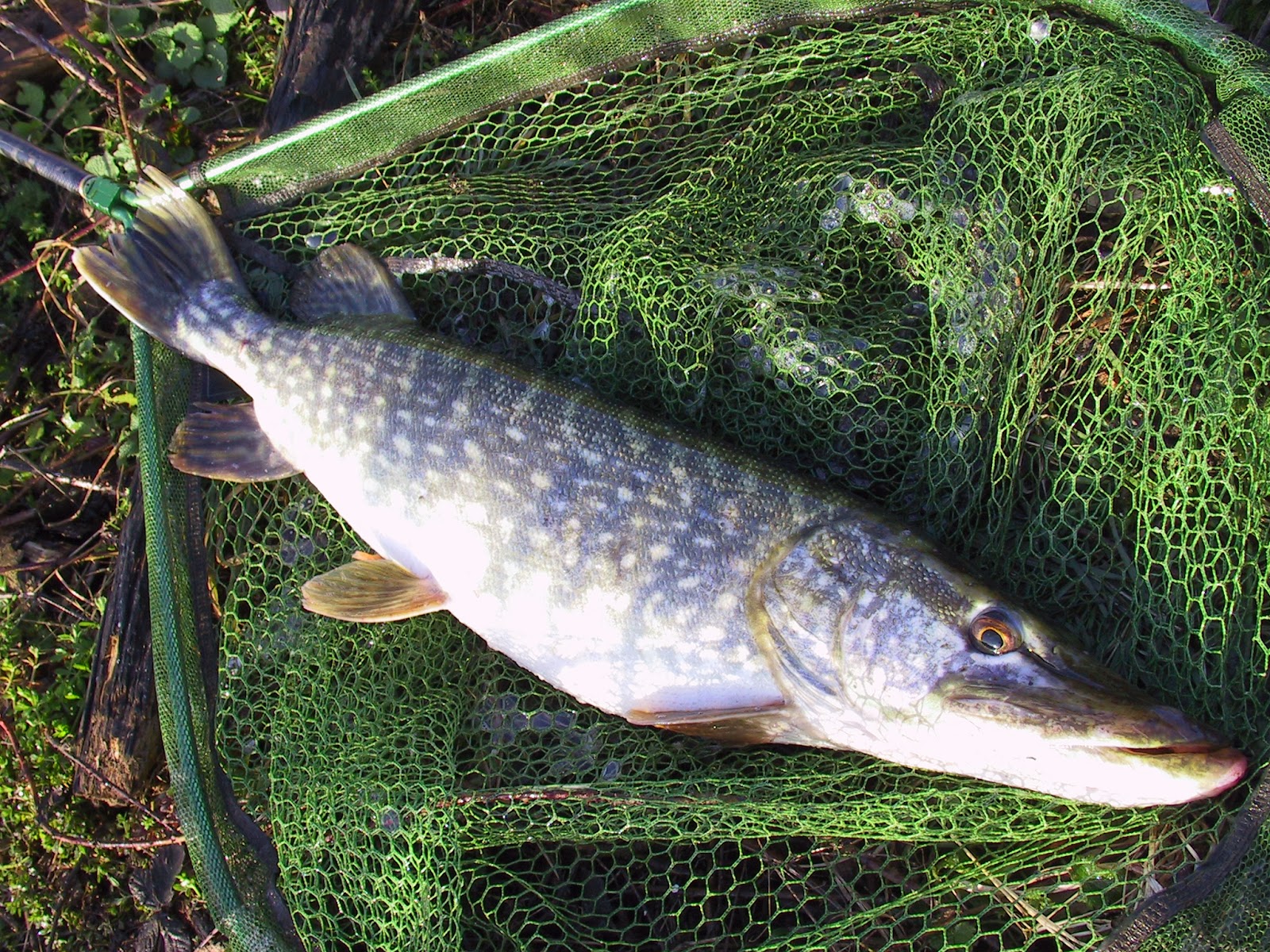 Last fish of the season

Stayed on for another half an hour or so, but that really was it for the season. The sun had started to bring the boats out again and I was nearly caught out by low flying Canada Geese on two occasions and had to rush down to drop the rod tips as they came skimming up the river. The smell of frying bacon from the cafe on the other side of the river was the final straw. My co-angler had already left by the time I got back to the car, having "not had a nudge" according to two dog walkers, so my season had ended better than some and at least the wife will be glad I've made some room in the freezer!
Posted by Toodle 1 comment:

Was itching to have another go for a big grayling before the end of the season so, after making the necessary arrangements with my friend Tim, I was off up the A52 towards Ashbourne again. Was wet, cold and windy on the way up, but thankfully it had started to clear up by the time we came to head upstream from the car park to the first section and eventually it turned into a nice Spring day. Once again Tim pointed out the likely lies as we went and I have to say now that throughout the day his advice was bang on the money, with every spot indicated yielding a take, if not a fish in the net.

Had a few casts in the first spot we came to, then switched to a heavier team of flies to cope with the flow. Next cast in, literally where I'd been wading around a few minutes earlier, a small male duly obliged and got me off the mark. 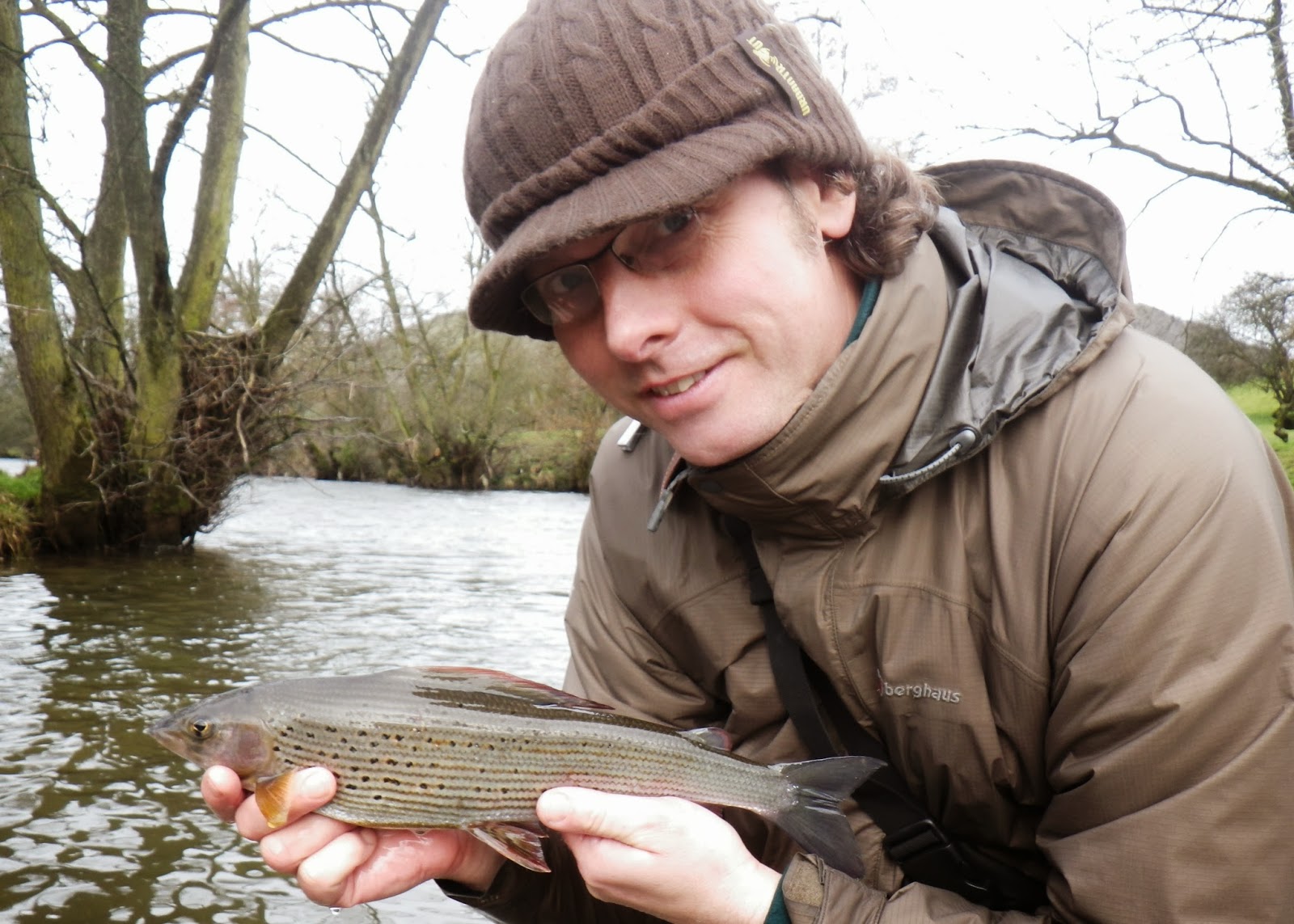 Had an out of season spotty from the same swim before we moved down to the next section. Tim was then quick off the mark with two grayling, including a 43 cm male that really got my interest going. However, it was just another small male and an oos brownie to me before we were off again downstream. Started at the top of a long glide and, under Tim's instructions, dropped the flies into a small pocket behind a mid-stream boulder. Unfortunately, I lost the resulting fish after giving it a bit too much line to play with in the flow. Tim then left me to work down the rest of glide myself and I had nearly reached the bottom when I had a good clonk on the tip. Saw the fish twist in the clear water and knew immediately that it was a good one. Gestured the fact to to Tim who was also occupied downstream (in fact he hooked and landed two female grayling in the time it took me to get mine in!). Played it with my heart in my mouth and sank down on my knees in the shallows when I finally got it in the net - a 45 cm male fish of 2lb 9oz and a personal best. 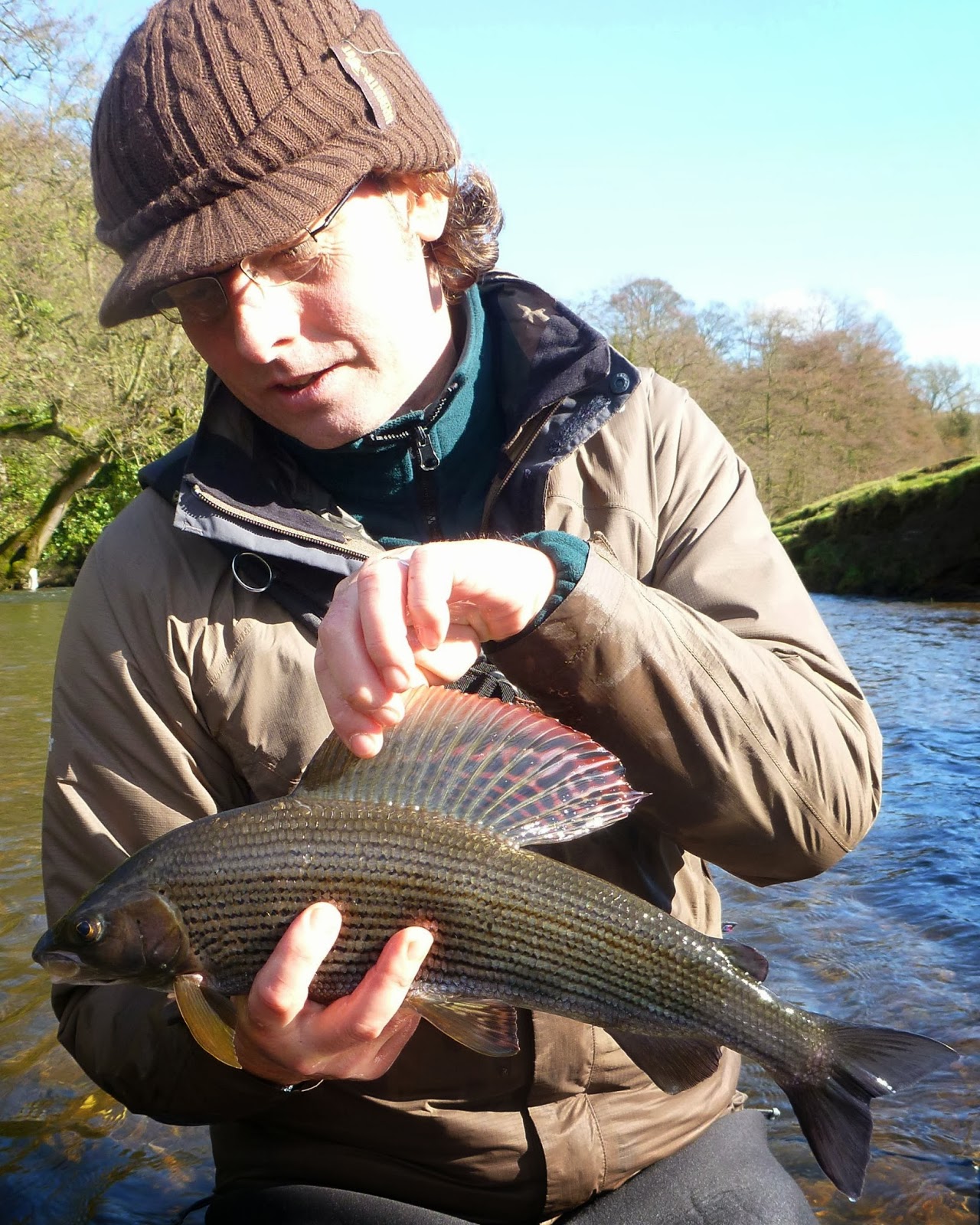 Took a quick snap before holding him in the shallows to recover, but to be honest I think he was in better shape than me after our joint ordeal! 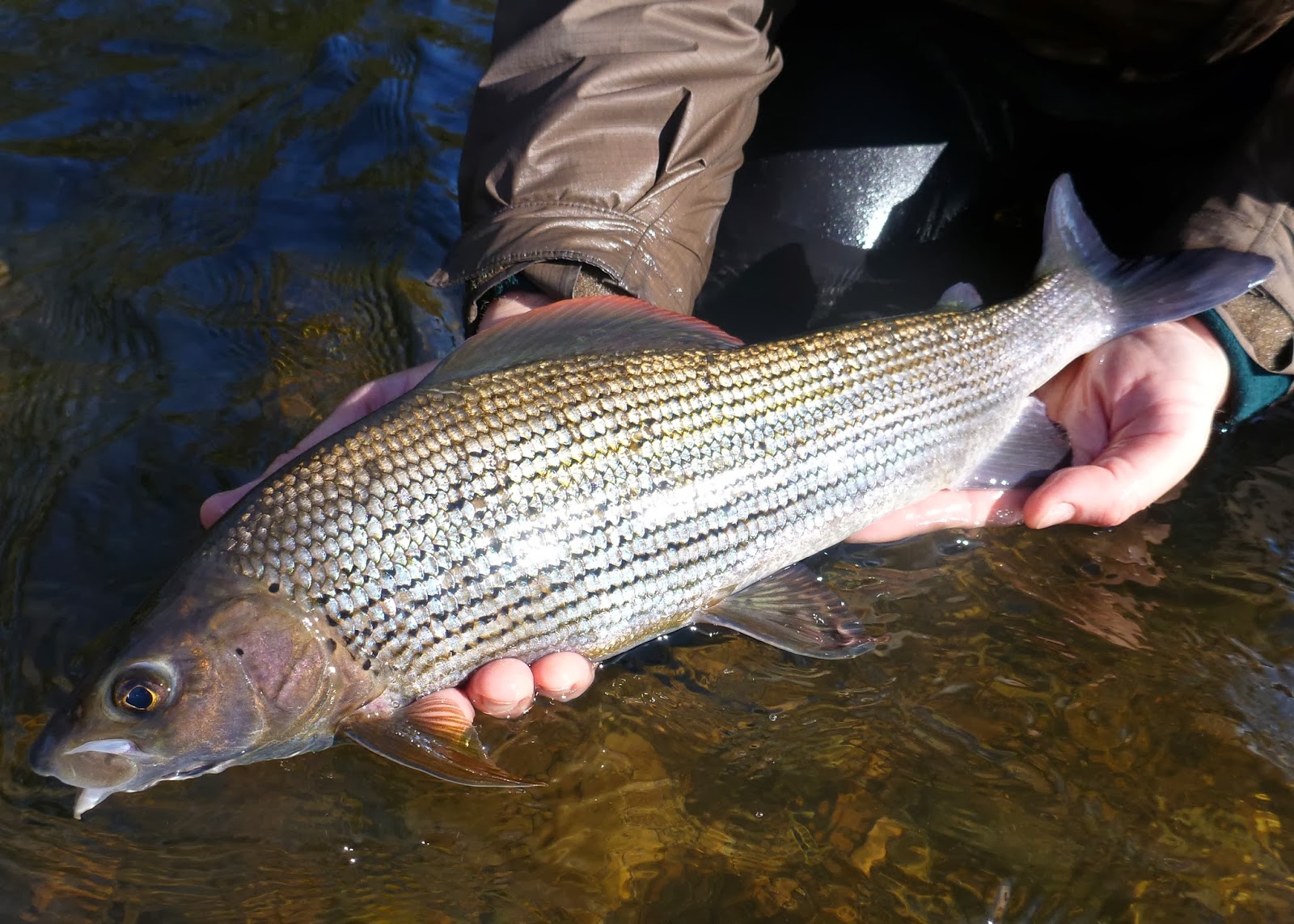 Once I'd got my breath back, Tim suggested I moved down and try just upstream of where he'd just been as he suspected that the males would be hanging in the shallower water above the females in preparation for spawning. Again, he left me to it and headed off to try elsewhere. Second cast I lifted into a fish that again twisted under the surface, giving me a glance of a long silver flank. Had a hairy moment when my landing net fell to bits and I had to scoop the fish up minus the handle, but was soon looking at another clonking male of 44 cm. 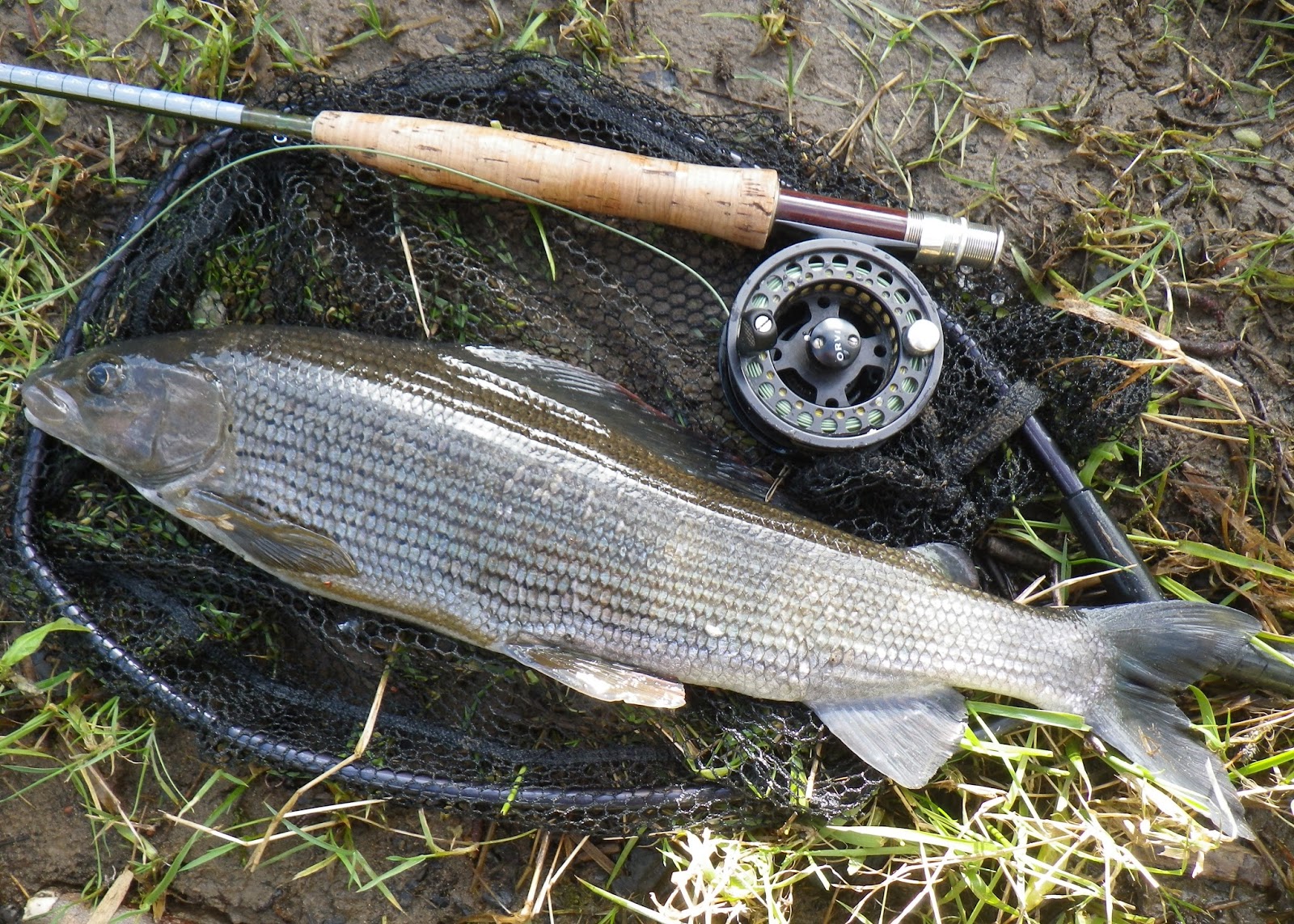 Got even better as next cast saw another take and another 40 cm+ fish, a male of 42cm with a dorsal fin like a sailfish, which was then followed by a small female. Caught up with Tim shortly after this and we carried on downstream, taking a few more fish between us as we did so. Having reached the bottom of the beat we walked all the way back upstream to try another glide where Tim suspected a few fish might be gathering pre-spawning. Second cast in the line hesitated, literally where my head was casting a shadow on the water, and I bent into what turned out to be a fat, deep-bodied female of 41 cm. 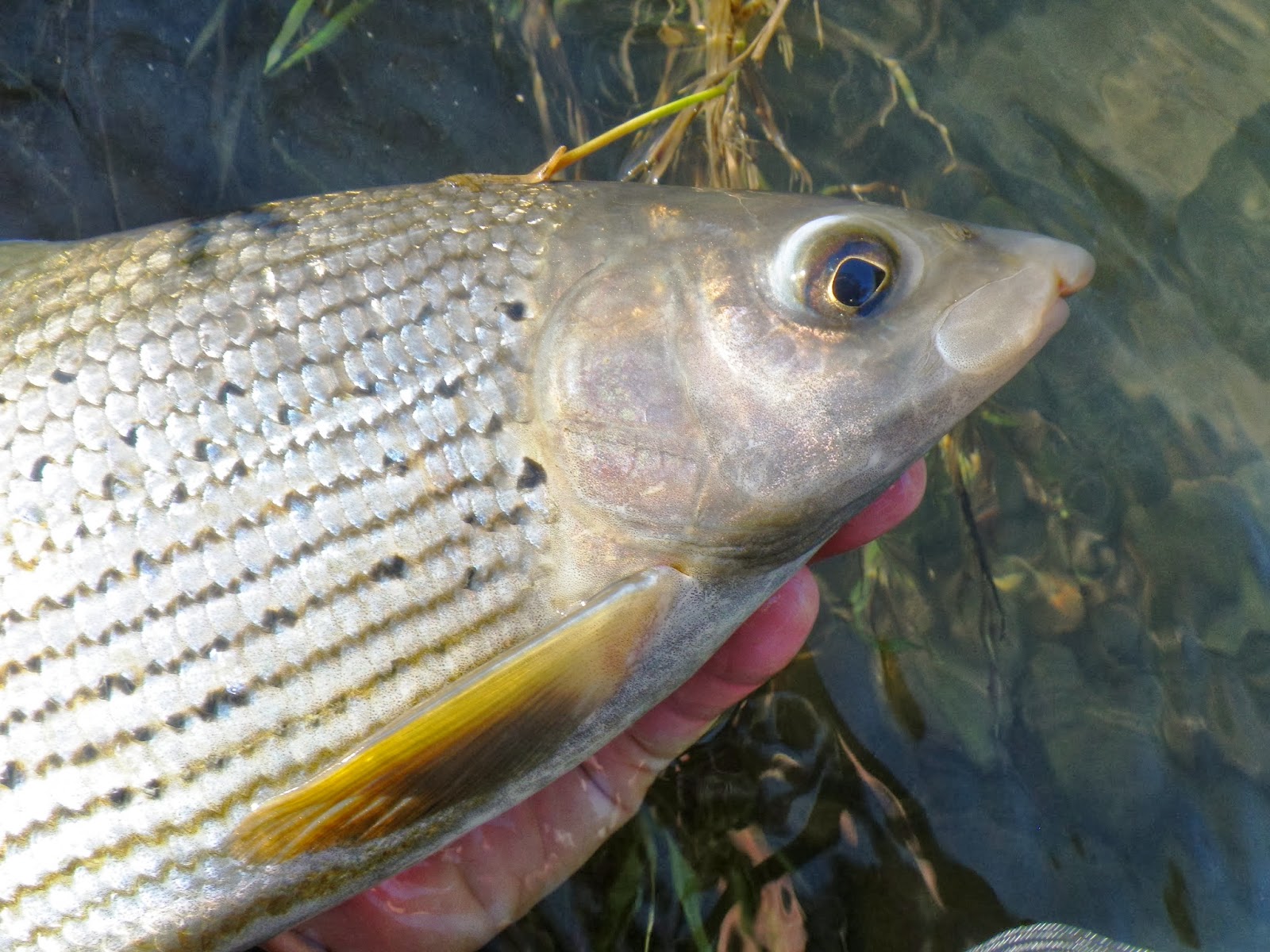 The sun had disappeared behind the hills at this stage and it started getting distinctly chilly so, after one more oos brownie to me and with aching backs and joints from being in the river all day we headed back to the car. A great day all 'round and the perfect antidote to what's been a pretty dire winter. Thanks mate!
Posted by Toodle No comments: