Couldn't resist another shot at those LBT's, so it was up bright and early and down the motorway for an early session before work again. The intention was to try a bit further away from civilisation this time, so set off upstream from the car park. Was overcast and damp again and the overnight rain had just put a touch of colour in the water, so things looked promising. However, walked past the first signs that others were showing an interest in the brook's inhabitants - a cleared area of bank and an empty tin of yellow peril! 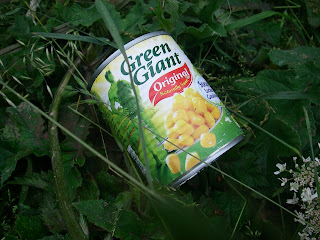 Hmmm!
Carried on until I reached a spot where I'd had a couple of fish previously. Sure enough, first drop in resulted in a rattle on the rod tip and fish on. As usual it buried itself in the marginal vegetation under my feet. However, after sliding in to retrieve it, I found my hook connected to a clump of grass and not to a fish. Bumped another fish off before heading up to the pool. No fish rising this time, but first cast up to the top of the pool resulted in a take. This one charged around a bit before again shedding the hook, this time in some tree roots! Bumped another fish on the next cast, aargh! By my reckoning it was now four - nil to the trout and beginning to look like one of those days. Thought a third cast into the pool was pushing my luck, but tried it anyway. Bang......blimey! This time it stayed on. 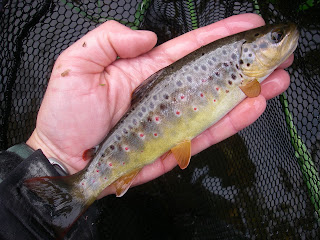 Left them alone after that one and carried on upstream to try pastures new when I bumped into an old biddy and her alsation on the footpath. Thought she'd paused to let me past, but as I got closer she launched into a completely unexpected "people like you" tirade, accusing me of all sorts of things from taking fish to breaking down trees and bushes. Assured her that I was doing none of those things and even offered her my ID, but she was having none of it. Now I usually enjoy a good toe to toe, but I could see that this one wasn't going anywhere, so made a tactical withdrawal (yes, I ran away from an old lady, but she did have a very sharp tongue and a big dog!). Was far too early to think about going to work, so headed further downstream instead. Here the brook runs very close to houses, but is extremely overgrown with nettles and willows, so it was a question of pushing through the vegetation to try and find a suitable places to drop in. First spot yielded a little gem. The smallest, but probably the fattest trout I've had so far. 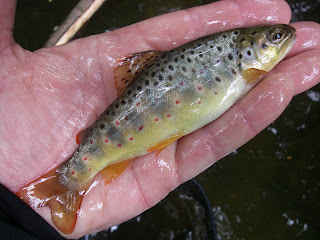 Two more closely followed, including the best of the morning from a hole under a mat of willow roots. 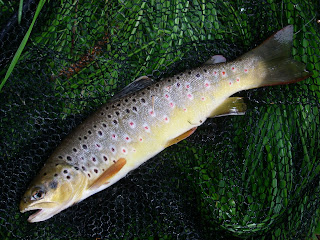 More like it
﻿
Was evens in terms of fish landed/fish lost by now. However, the trout had the last word as I bumped another one off, then snapped off the end of my hook on a snag. Took that as a natural end to the session, but was still pleased to have caught a few fish while most people were in bed.
Posted by Toodle No comments: