Had half-term at the in-laws' holiday cottage in rural France. Main object of the week was to get some miles in on my road bike but on this occasion I also threw in my light lure rod, as I had discovered that you can now buy your holiday permits online (www.cartedepeche.fr) in advance. I'd like to say that I subsequently emptied the local River Charente with my fancy gear but, despite being assured by locals that there were sandre (zander), brochet (pike) and perche (obvious!) present, I didn't get a sniff. I did see some sad little 2oz perch in a bucket destined for some Frenchman's supper, so guessed anything bigger was probably well gone. For my first session back in the UK, work had me heading over in the direction of Loughborough, so I threw the lure rod in the car and stopped off to steal a couple of hours on the Soar at Sutton Bonington. However, was dealt a double blow when I got there. There was a match setting up downstream of the carpark and I was told that the towpath upstream was going to be closed in less than an hour as contractors were tree cutting. Legged it up to the top of the section to make use of what time I had. Thankfully, third cast I had a small jack on the Savage Gear "Real Eel", hooked on the stinger. 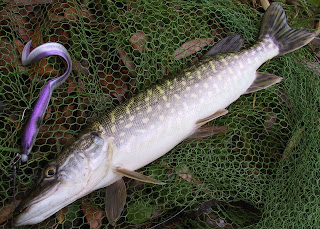 First one on the Real Eel

A few casts later I had another slightly larger one that had completely gobbed the lure (he also looked as if he'd had a recent encounter with one of his bigger brethren judging by the jaw-shaped crescent across his back). 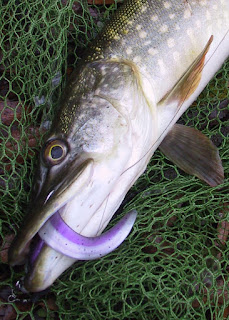 Hungry!
Waited for a boat to come past then ran the eel down the marginal reeds. Bang! Another one, which again had "inhaled" the lure. They seem to like them! Saw flashing amber lights down the towpath at this stage, so that was that. Thirty minutes fishing and off to work!
Posted by Toodle