Had a couple more sessions out on the River Soar for the zander, but you can probably tell from the title of the post that this didn't go entirely to plan! The first was on a navigable section of the river, one I normally fish at the back end for the pike. The odd photograph and snippet of information indicated that zander were present and of reasonable size, but gave no clue as to how prevalent they were. Got there late afternoon while it was still bright and sunny, so found a swim and waited for the boat traffic to die down and the sun to dip below the trees before casting in. Put one bait over to the boats and one down the middle and settled down to wait. 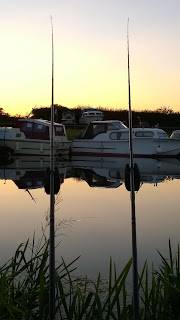 The downstream rod started knocking just as it was getting dark. However, the culprit turned out to be a small pike. This was repeated a few minutes later, only this time I slashed my thumb to bits (again!) unhooking it and then, whilst bleeding profusely and looking for something to staunch the flow, somehow managed to tread on and break my glasses! With no more action forthcoming it was a bit of a disaster, made even worse by the fact that I did my back in a couple of days later and everything - work, cycling, fishing - had to be shelved for three weeks. Needless to say, once I'd got the all clear and had been discharged by the physio, I was itching to have another go, so took the fact I was working down at Rothley for the day as an opportunity to have a couple of hours on the river on the way home. Again, it was bright and sunny when I got to the river, so had a leisurely wander downstream and was pleased to find that "pole position" was vacant. Popped a couple of dead baits out into the usual spots thinking an early bonus pike might be around and wasn't disappointed when the downstream rod started nodding a few minutes later. Turned out to be a nice double of 13lb 12oz that gave me a really good scrap on the feeder rod, going through my other line in the process! 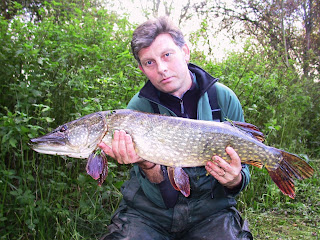 Spent a few minutes sorting out the "knitting" and re-tackling both rods as a result. However, a short while later the downstream rod was off again, resulting in another double of 11lb 1oz that coughed up a dyed, red sprat in the landing net. Had managed to unhook the first one without any mishap, but returned true to form when I caught my middle finger in the second pike's gill rakers - more blood! 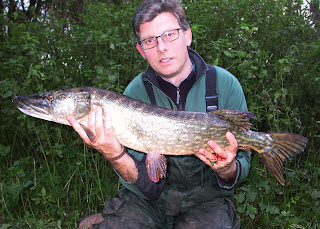 Got runs at regular intervals after this, netting three jacks before hooking into another decent fish just as full darkness was approaching. A flying treble caused me a few problems at the net before I eventually had another double of 12lb 8oz on the bank. 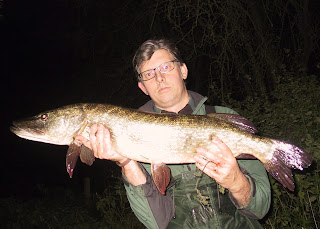 Was running out of bait and heading towards last knockings when something tore off with the downstream bait again. This time it was what I was after - a zed of 6lb 13oz. A bit better looking than some of the examples I've had recently with all of its fins intact. 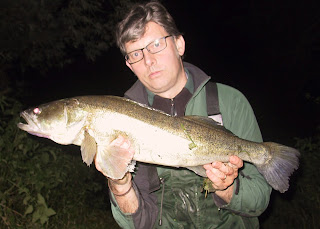 Packed up after this and headed home. Wales for half-term next, so planning to get some sea-fishing done. After that, more short evening sessions after work and hopefully a few more zeds!
Posted by Toodle