Half-term saw us Wales-bound once more and with it my first opportunity to cast a line in saltwater in 2017. I had decided that, despite my obvious handicap of living in the East Midlands and nowhere near the sea, I would join a species hunt this year. Twenty looked a reasonable target, based on what I've caught over the last couple of year plus a few new, targeted species that I've not fished for before, such as flounder, bream and a couple of the other goby and wrasse species. I was also keen to try out my birthday present - an HTO Rock Rover travel rod. I duly joined the World Sea Fishing Forum Species Hunt 2017, printed off my card and was raring to go. 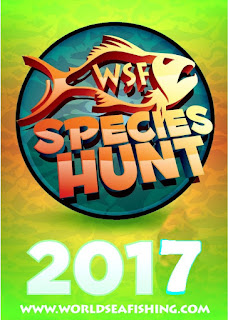 Unfortunately the weather had been cold and wet prior to our arrival, so first trip down to Pembroke Dock for high tide I was met with a murky, coloured sea and another angler's rubbish (there's a tackle bin ten feet from the top of the steps, you knob!). Had set myself a target of five species for this holiday - pollack, coalfish, rock goby. black goby and common blenny - but still saw this as achievable despite the conditions. 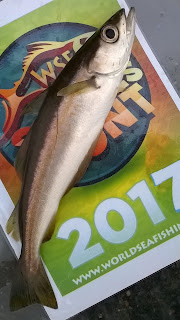 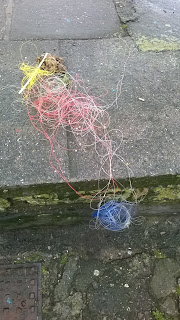 Set about seeing what I could winkle out using isome, angleworm and raw prawn fished dropshot-style or on a scaled-down "two up, one down" rig. I was pleasantly surprised to catch a couple of pollack fairly quickly, both on pink isome. However, things were very slow after that and I struggled until a switch to prawn brought a solitary rock goby. Again, I was surprised that there weren't more of these around as come the summer you won't be able to get away from the things! 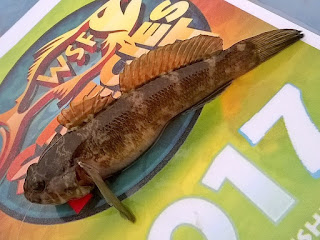 With the tide starting to run out again, that was first session over. However, it had a sting in the tail because, as I bent down to pick up my tackle box, I felt the all-too familiar stab of pain in my lower back. Don't know whether it was standing in the wind for an hour that did it, but by the time I got home my back was in spasm.

Next morning, suitable reinforced with one of the father-in-law's back braces, but still in pain and hobbling like an old man, I headed to my shanny "hot spot" on the estuary at Lawrenny. 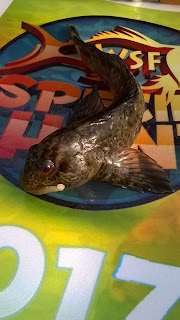 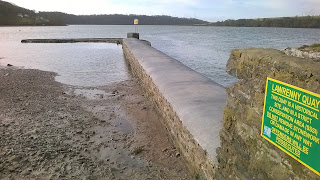 The tide was still flooding in over the top of the old quay, so I waited for it to slacken off before dropping a bit of prawn tight down the side of the wall. Again, in the summer this would have been met with an instant response, but on this occasion I had to wait for a few minutes before the solid tip of the Rock Rover registered any interest from below. However, it was at least the species I had come for. 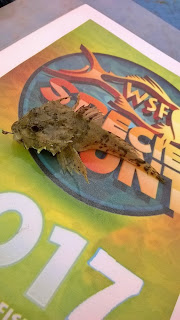 Only managed to add one more after that. Had a few casts with a Savage Gear sandeel to see if there were any pollack or coalies about, but to no avail, before limping back to the car. Contemplated trying the weedy margins on the way for a common or sand goby with a splitshot rig, but it was too murky to spot anything, so decide to leave that for later in the year.

Following day I hobbled back to Pembroke Dock. The sea looked a bit clearer and it was a bit warmer, so more pleasant for me although it had probably done nothing for the sea temperature. Managed a few more pollack from the off, followed by a couple of rock gobies. However, didn't look as if I was going to add to the species tally when I had a little tremble on the rod tip. Had a nice surprise when a tiny long-spined sea scorpion appeared on the surface. Switched to the sandeel again when the tide started running in the hope of a coalie, but drew a blank. Still, whilst I'd not quite managed to get the exact species I was after, I was off the mark and in the hunt and already looking forward to Easter when I'd be back again!