Was in two minds whether to write this up or not as it was basically a carbon copy of my previous session and I wouldn't want my audience to think I'm getting a bit "samey". However, this is as much my own angling diary now as anything so even if I'm the only one that reads it there will be some benefit, not least because it helps me to justify the cost of the club book to myself every year! Anyway, looking at the calender and the weather forecast, this was my last chance to have a few hours on the river with the float rod and the 'pin before it got wetter and cooler. Therefore switched off the laptop at three o'clock, left the work mobile on the table and was out the door pronto, only stopping at Bridge Tackle at Long Eaton for some more of their super-sized grubs. When I arrived it seemed that the local "yoof" had the same idea, but for a different reason, as a gang of them were already stripping off to their swimming trunks near the footbridge. 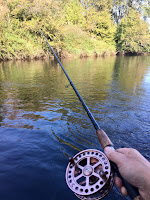 Luckily the swim I had in mind was well upstream from them. Rather than rove around I was just planning to spend a couple of hours in the spot I ended up in last on my previous session, as this had been the most productive in terms of numbers of fish and species. Waded out at the tail of the island to mid-thigh so I could trot down the flow, which in the low water conditions was pushing down the far bank. River was gin clear again and there were big shoals of minnows everywhere. I fully expected these to become a pain in the arse once I'd started feeding a few maggots. However, after just a few casts, I had a nice grayling of the stamp I was hoping to be catching over the coming winter period. 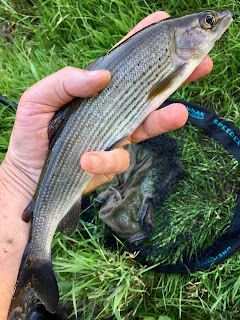 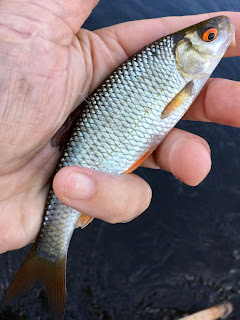 Carried on sending the stickfloat down the run, pausing only for a very polite canoeist and picking up a couple more grayling, along with a few dace, roach, perch and bleak in the process. As expected, it wasn't long before the loose feed started attracting attention, but not from the minnows. 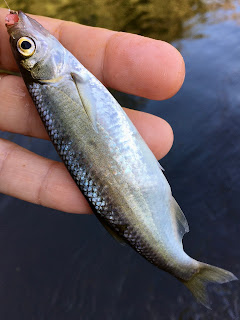 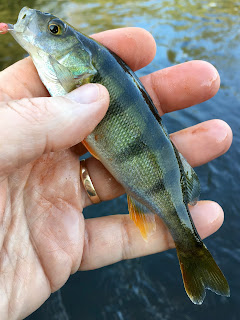 A shoal of small chub had moved in and were soon smashing into the maggots in a mini feeding frenzy as soon as they hit the surface of the water. Played around with my shotting pattern and float depth and managed to trick a couple, but the majority seemed to easily avoid my hookbait amongst the free offerings. You wouldn't think that they would be that picky, but I've since found an interesting article called "The Fall of the Maggot" discussing how different factors, including type of hook, age of maggot and hooking style, affect the "naturalness" of your hookbait here! Wasn't sure at this stage how much loose feed, if any, was actually making it past the surface and down through to anything else, so I moved about 50 yards downstream and started again. 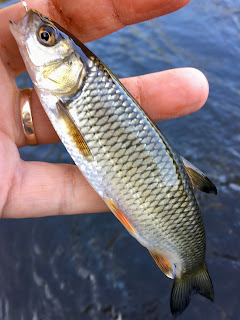 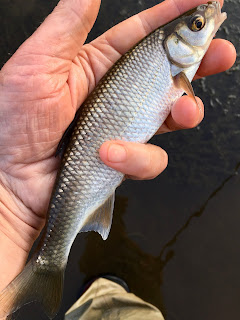 Had a few more chub and the biggest dace of the session before I got a text from the wife to say she was home from work and was ringing the dinner gong. Didn't have any gudgeon this time, but it was another short, enjoyable session. Give me a pint of maggots and a float rod and I'm happy as Larry. However, as much as I love catching "tiddlers", there's a big stripey or zed out there with my name on it somewhere.