My better half is a teacher so, whilst the kids may have grown up, we are still tied to the school holidays if we want to go away anywhere. With Nottinghamshire being blessed with a two week, autumn half-term, the plan was to get away to see the in-laws down in Pembrokeshire and for me to get some more sea-fishing done after finding a couple of new spots in the summer. Unfortunately, with COVID-19 infections increasing again across the country, firstly Nottinghamshire was put under Tier 2 restrictions and then Wales went into their 17 day "fire break", so that was the end of that. Hugely disappointing as we have done everything as a family to remain "low risk", but understandable given that the NHS is under pressure once again. Rather than cancel my leave, we've stayed at home and made the best of it and have got out and explored the local countryside on foot. However, as I write this, we are now waiting to find out when, rather than if, our part of Nottinghamshire moves into Tier 3. The weather has also done it's best to put the boot in with rain and strong winds forecast for at least the next week or so. 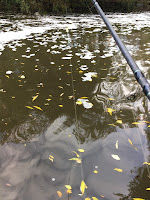 I therefore decided to make use of a window of opportunity on Friday, but even then the weather conditions limited my choice of venue. I would have loved to have had another crack at those canal zeds, but opted for somewhere a bit closer to home where I knew I would get some shelter from the stiff south-westerly wind. After some lunch I therefore headed to Soar Tackle at Kegworth for a pint of maggots before driving the short distance to the river, which was carrying a tinge of colour after some heavy showers earlier in the day. Walked upstream to my usual spot to find the level up and the river pushing through. However, the slower water on the inside of the crease looked perfectly fishable, although I could see that the number of leaves in the water was going to be a pain. 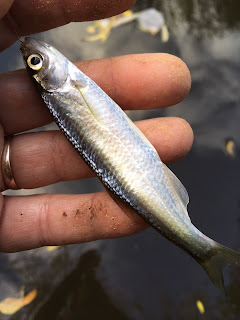 Waded upstream slightly, so I could run the float down off the rod top without having to cast across the eddy on the inside. About second run down the float disappeared resulting in the first of many, many bleak! A lot of the time they must have been taking the hook bait on the drop and then just swimming along under the float, as a strike at the end of the trot invariably met with either a fish or a crushed and sucked maggot! With those numbers present it must have been hard for anything else to get a look in, but I did manage a few roach, dace and chub in amongst the pearlescent hordes. Interesting that bleak scales were once used to make artificial pearls, a process conceived by a certain Monsieur Jacquin in Paris in the 17th Century. Thames bleak fishermen were major exporters to France at the time, with 18,000 average-sized bleak yielding about 7lb of scales. Really?

Firstly, the Thames must have been stuffed with them and secondly, it must have been incredibly tedious to catch and de-scale them! Back to present day, with that number of prey fish in the swim I figured that there must be some predators about, so the perch rod was deployed once more just off the crease in the slack to my right. 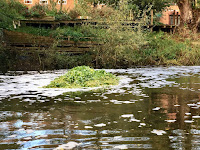 However, despite there being a such a bleak banquet available, nobody appeared to be at the feast as this rod remained undisturbed for the rest of the session. Perhaps that was the problem? My bait could have been like a needle in a haystack for all I knew.The only other excitement came from the occasional, big clump of invasive pennywort that floating down through the swim like a green iceberg, presumably dislodged from upstream due to the higher flow. 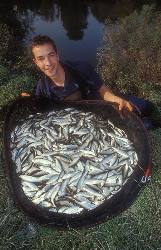 There's an ongoing and expensive battle by the authorities to control pennywort on the Soar by spraying with herbicide and on a bad year I've seen it render whole sections of the river unfishable due to the large mats of floating vegetation. Apparently a penny-wort munching, Argentinian weevil is possibly the solution, but still going through approval stages. Anyway, I carried on catching until I could no longer see the float and by which time I'd given up counting, not that I would have challenged a certain Hadrian Whittle. He managed to catch 2,100 bleak for a weight of 55lbs in a five hour match on the River Wye and then in a five hour, timed session for the Angling Times caught another 2,100 slightly larger bleak for 70lbs. I work that out to be a fish roughly every eight seconds! Apparently he went on to record five more match weights of bleak over 40lb. Assume he must have got repetetive strain injury and retired after that!

Headed home grateful to have got out, but a bit deflated - was that a last hurrah for a while? We shall have to wait to find out what Boris has in store for us next week.......