Hopes of a quick session on the Derwent last Friday were dashed by rising water levels as the lower river presumably reacted to rain higher up in the catchment. At least that gave me time to repair the hole I'd somehow bodged through the seat of my neoprenes last time out! 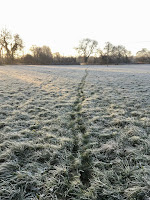 The weekend was therefore spent consulting XCWeather and the river level service on .GOV.UK to determine the next available window of opportunity. Luckily one presented itself sooner than later with calm, albeit cold, conditions on Monday looking ideal for a trip to my favourite Dove tributary, which was in the process of fining down rapidly. Was a bit of a shocker waking up on Monday morning to find out how cold it actually was, but after a few minutes spent scraping the car windows I was heading west on the A50. Arrived at the venue just as the sun was burning through the fog and lighting up the frost covered fields. Got all my layers on and headed upstream, defacing the otherwise blank, white canvas with the imprints of my size nines. 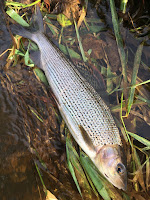 At first sight the river looked to be at a nice level, with just a tinge of colour and not too many leaves. My only concern was that the drop in temperature from mid-teens on Saturday to low single figures in the space of 36 hours would put the fish off. However, on just the third trot through the first swim the float buried as the two maggots (purchased pre-lockdown and now over two weeks old!) were scoffed by my first grayling of the day. Had a couple more, but didn't hang around as only half the pool was fishable due to a fallen tree and I was keen to see what other re-modelling had gone on since last visit - the beauty of fishing a small, spate river is that things are always changing from one winter to the next. 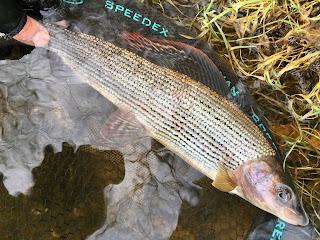 Next spot downstream was actually unchanged and one that I'd had several fish over the pound mark from in the past, but had recently become a bit of a bogey swim. I therefore wasn't expecting much and was on the point of moving on again when the float disappeared and I found myself connected to a much better fish that dogged around in the current before heading upstream. Frayed my nerves a bit when it went airborne a couple of times and I saw it was a decent grayling. 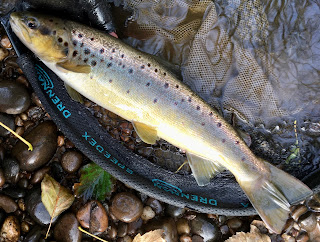 However, the size 16 Kamasan Animal held and the Ultralite eventually took its toll as a cracking male rolled into the net. Carried on downstream picking off a few fish here and there, with some swims being a bit kinder than others. Had a couple of grayling out of one pool before hitting into another good fish, only this time when it erupted from the service like a missile I saw it was a spotty instead. Out of season and in mint condition with a buttery yellow belly it went back straight after a quick snap in the net. 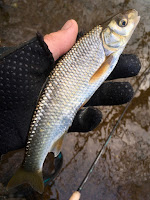 Stopped for a late lunch in the next spot, again one that had always been good for a few fish. However, first trot down after finishing my chorizo, hummus and salad cob I had a chunky dace instead of the expected grayling. He was followed by five of his shoal mates before the swim died and I moved on again. At this point I decided walk much further downstream to another previously productive swim. As I approached I could see another member who I'd met before just in the process of packing up. He'd been fishing with nymphs all day but hadn't had a touch. After we'd had a chat he said he was calling it day, so I had a cup of coffee before dropping into the swim he'd just vacated. 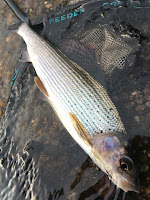 Felt a bit guilty when the float buried not once, but four times in quick succession! My fellow angler re-appeared on the opposite bank just as I was unhooking the fourth grayling, mumbled something about "giving up fishing" then carried on back to his car. Was starting to lose the light by now, so I had a quick walk to the downstream limit, more out of curiosity than anything as I'd not ventured that far before, although I did bump a couple of fish in a swim that was marked for further attention at a later date. Went back to the car and had another coffee in the gathering gloom before heading home. Had 28 grayling, 6 dace and 3 brownies in total, so was glad that I'd taken a gamble on the weather.
The only downer to the day was Bozza threatening stricter restrictions when we go back to the tiered system after lockown, so I'll have to wait and see if and when I can return.
Posted by Toodle