Really have to struggle to remember the last time I went a whole month without fishing. Had planned to have a few trips in between Christmas and New Year, but that went out the window when I did my back in on Christmas Eve. I've had a weakness in my lower back ever since I put it out lifting sugar beet by hand whilst doing crop trials as a student with the Ministry of Agriculture. Whilst I try to be careful, there are occasions when just minor, random movements are enough to leave me contorted and hobbling for days - luckily a good physio lives down at the end of our road! 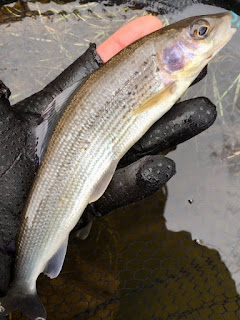 By the time I was on the mend, Bozza had announced another lockdown, although some effective lobbying by the Angling Trust meant that us lucky anglers were allowed to continue to pursue our hobby, albeit "locally". However, I didn't really have time to wrestle with my conscience about what this actually meant as the weather decided to put the boot in, firstly an "exceptionally wet" January with both the Soar and Lower Trent catchments receiving more than 200% of the long term average rainfall and then a freezing start to February. When the forecast signalled a return to more normal temperatures I therefore decided on a trip to my local River Derwent - within justifiable distance should I be stopped by the overly zealous local plod and with a decent head of grayling to go at. The only spanner in the works was the risk that the rising temperatures would result in snow melt affecting the river. 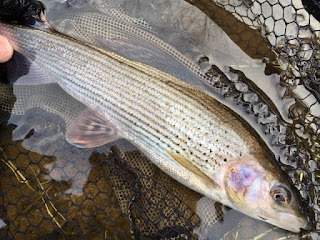 The river up until this point had been dropping steadily day-by-day, but when I checked the levels again before heading out in the morning I saw that it had indeed risen a few centimetres overnight. Undaunted I was soon river side and a quick check out of the car window before committing to unlocking the gate to the club car park confirmed the river was at a fishable level and carrying just a tinge of colour. The temperature upon arrival was 5 degrees Centigrade, so it felt positively warm compared to the previous week. 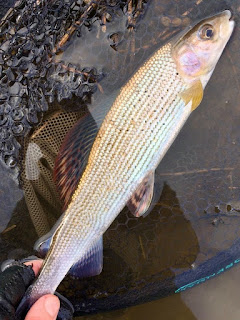 Walking upstream to my starting point I scared off a couple of goosanders, so took that as as sign there were some fish about. The lack of any footprints other than my own also showed that I was the first person to visit since the floods had subsided. However, in truth the river was a bit higher than when I'd fished it before, so many of the usual spots were out, being too fast or "boily" for the fish to be sat out in comfortably. I was also expecting them to be shoaled up, so it would be a question of fishing the quieter spots in order to find them. As it turned out I dropped onto a little group straight away, running the float down the side in what would normally be just a few inches of water. Had eight small grayling in quick succession out of an area the size of my dining table - all like peas in a pod - before hooking and landing a much better specimen of just over a pound that gave me a good scrap in the current. 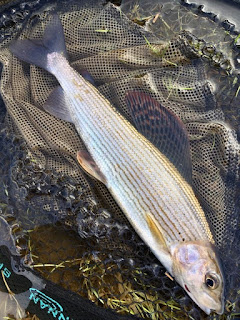 Possibly spooked the remaining fish in the shoal with that one as I didn't have another sniff, so moved downstream. Tried a few more likely-looking spots, but failed to find the fish again in numbers, just taking one or two individuals out of each. By the time I had reached the footbridge back to the carpark I'd made every bite count and had a baker's dozen of grayling, including three over the pound mark. Decided to finish there for lunch as the strengthening wind was making things tricky and returned to the car, spotting my first ring-necked parakeet on the way (apparently now established in a few spots around Derby). Pulling out of the carpark the thermometer was now registering a balmy 13 degrees Centigrade! Back at home I checked the river levels again and saw that it had continued to rise while I'd been there. Was therefore happy with the result, particularly as I'm now looking the weather forecast and thinking that the rest of my week off will be spent decorating rather than fishing!
Posted by Toodle