Wrapped up work early this afternoon and headed to Bridge Tackle in Long Eaton for a pint of the best kept grubs in the East Midlands. A few minutes later I was pulling on my chesties in an empty carpark next to the River Derwent at Draycott. 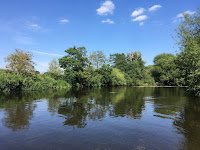 The day had turned out warm and sunny so by the time I had walked upstream to the upper limit I was sweating profusely and couldn't wait to get in the water, if only to cool off. With no wind the river was like a mirror and a completely different beast compared to when I'd visited in the winter - gliding smoothly over shallow gravels, rather than a boiling mess. Finally dropping into the water just downstream of the weir I scattered a large shoal of fry in the crystal clear water - good news for future provided they avoided the female merganser and her brood of seven youngsters I'd passed earlier. 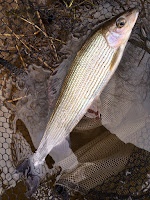 Ran the float through a few times but didn't feel confident in the bright conditions, so moved a little way downstream where some broken water dropped into a deeper pool. Second trot through the float disappeared and I struck into a solid weight. Was left in no doubt that I had hooked a barbel when it suddenly woke up and headed straight for a snag, bending the Acolyte double in the process. Hung on grimly for a few minutes locked in a stalemate but as the rod tip started to ease back it started to look as if the pressure was telling and that I was gaining the upper hand. However, there was another lunge and everything fell sickingly slack - the line eventually snapping at the hook. 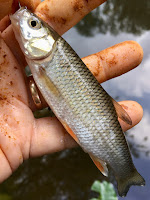 Tied on a new hook link and next trot down the float buried again. Thankfully lightening didn't strike with a summer grayling coming to the net instead. Had nothing else out of that spot, so moved downstream again to a long glide shaded by trees. Trotted the float down as far as my failing eyesight would allow and started picking up the odd dace and chub at the bottom of the swim. A few late mayfly were emerging around me, struggling laboriously off the water's surface. However, as soon as they reached the height of the tree line they were unceremoniously nailed by the wagtails and great tits lying in wait for an easy meal. Moved again after another angler set up in the swim downstream, his presence given away by the cloud of cigarette smoke that preceded the "splosh" of a heavy feeder in mid-river. 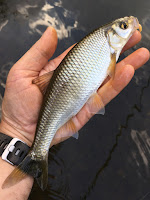 In the next spot the low levels allowed me to wade out into mid-river and run the float down along the bushes on the far margin. Was hoping there would be some chub in residence, but could only add a few more dace before the bites dried up, probably not helped by several bumped or lost fish. I'd lost my last Kamasan Animal to that earlier barbel and had put on a similar barbless pattern that just didn't seem to be doing the business. I therefore dug around in the bag and found some Drennan widegapes and tied one on instead. Tried a couple more spots, but only the dace seemed to be interested and I was again frustrated by bumped and lost fish, including what felt like a couple of lumps, despite the hook change. 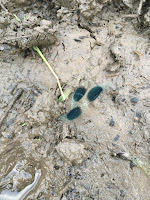 With more barbel anglers arriving for the evening I therefore decided
to call it a day and head home for some supper, stumbling across a damselfly graveyard on the way. The long grass had been full of banded demoiselles and something had obviously been taking taking advantage of this bounty, consuming the best bits and discarding the wings in the mud. Now getting on for nine o'clock it was still very warm, so it was a relief to peel off the waders back at the car and air my sweaty legs. Had been good to get out on the river for the first time this season, although conditions probably hadn't been ideal. Must sort out the hook situation before my next session though!
Posted by Toodle