Looking at the weather forecast it was going to be Wednesday or bust if I wanted to head up to the North coast for a wrasse session, which meant sourcing some bait pronto. Therefore drove over to the tackle shop in Pembroke Dock again on Tuesday morning. Seemed rude not to pop down to Hobbs Point on the way, so factored in a couple of hours either side of low tide. 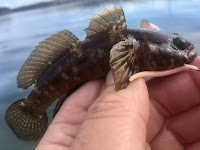 Unfortunately with it still being a neap tide the water level wasn't low enough to expose the end of the car ramp. This would have given me access to an area of muddier ground and the chance of a couple of different species. Therefore fished "Gulp" sandworm and angleworm on a dropshot rig down the side of the ramp as before. Had a small ballan wrasse almost straight away, but then the rock gobies moved in! Could see some small pollack darting out of the kelp to scatter the shoals of even smaller sandeels.
It was inevitable that I started to pick up few of these as well, either on the drop or on the retrieve. Ended up with 32 gobies, 9 pollack and that single ballan before heading to the tackle shop for another quarter of rag (along with some very helpful tips on how to keep them alive for longer). 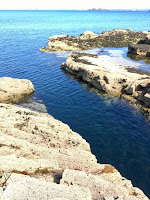 The following morning we loaded up the car, wrasse gear included, for a day up at St Bride's Haven. Had found a low water rock mark near there this time last year by doing some Googling and after getting the family settled on the beach I headed out along the coast path. Overshot the access down to the mark as nobody appeared to have been down there recently and I had to push through chest-high bracken and brambles just to reach the top of the cliff. Once down on the rocks I started off by fishing the deep, narrow gully to the right of my position. Water was absolutely gin clear and I could easily see the bottom for some distance. Had made up a twisted boom rig with a single size 4 carp hook and a rotten bottom to the lead. 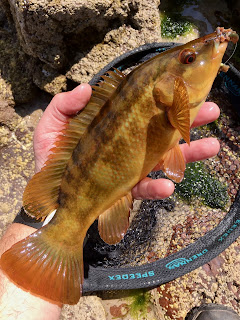 Baited this up with a ragworm and carefully lowered it down the side of the vertical rock face into the kelp, feeling for the bottom with the lead. Could feel small fish, probably pollack, pecking at the bait almost straight away. However, after a few minutes I'd failed to get a positive indication, so I switched to the more open water on the other side of the mark. The venue is also very popular with snorkellers, divers and spear fishermen and I had a few swim past me completely oblivious to the fact I was there, so when a couple decided to surface in front of me it was with obvious shock to see me stood on a rock about ten feet away! I did wonder whether all this disturbance was going to affect the fishing, but as the tide started pushing back in over the rocks  began to get some proper knocks and rattles on the rod tip. Striking into the first positive pull-down I had a short, spirited fight from a pretty, kelp-hued ballan wrasse.
After that it all happened in a flurry as I had another ballan, followed by three, stunning male corkwings. 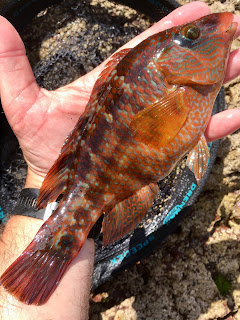 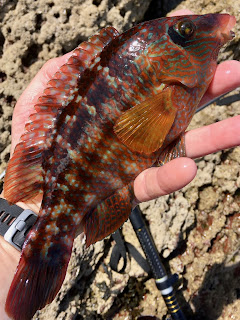 Unfortunately, I was now on borrowed time and had to  get back to the beach or risk the wrath of wife and daughter, so hastily packed everything away and scrambled back up the cliff. 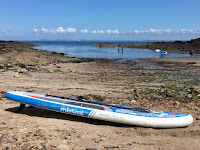 Had some snap and much needed drink (it had been hot on the rocks!) with the family, but then on the pretence of going out on the SUP I paddled back around the headland to where I'd been fishing in order to get the perspective from water level. The clarity was amazing and the transition from shallow to deep water was marked by a change in colour from clear to turquoise to almost blue-black. Made a note of several promising looking drop-offs, as well as spotting one wrasse that would have dwarfed the ones I had caught!
But as they say, that'll have to wait 'til next time. With days running out now the weather is going to dictate what I do next as unfortunately it looks like it's going to be wet and windy for the remainder of our stay.
Posted by Toodle