"Better out than in" was a comment on one of my previous posts. It was a phrase much used by my grandad and usually followed a healthy burp, produced solely to amuse us grand-kids and and annoy my nan. However, it also applies nicely to today's trip. I was getting fed up with this grey, gloomy, miserable weather we've been having lately, so the bright, sunny conditions this week came as a welcome change and a chance to top up depleted Vitamin D stores. 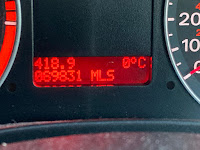 The rivers had also continued to fine down nicely and, whilst the likes of the Dove and Derwent would probably be at their best by the weekend, the smaller tributaries looked spot on for another crack at the grayling. A cancelled meeting happened to give me the few hours I needed (synchronicity!), so I had booked the morning off quick before anything took its place. After a quick scrape of the car windows I headed west on the A50 to Staffordshire with the first glimpses of light appearing in the rear view mirror. 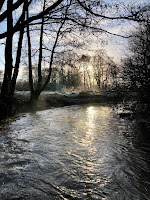 The temperature had yet to creep above freezing by the time I arrived, but with not a single cloud in the sky I knew it was going to warm up as soon as the sun got high enough. Set off across the frost covered fields, my footprints spoiling an otherwise pristine, white carpet. With limited at my disposal the aim was to quickly nick one or two fish out of each little spot (no need to build a swim here!), so I adopted a simple rule to keep myself mobile - ten casts in a swim without a fish, move on. Mist was rising off the river and the sun shining weakly through the trees as I fed a few freebies down the first run and sent the float after them. Sure enough, it promptly disappeared and a little grayling came to hand. Had another one before my self-imposed time limit came into force and I moved downstream.
Despite the cold conditions the grayling seemed to be in a feeding mood as the first drop into a new spot generally brought an instant response. 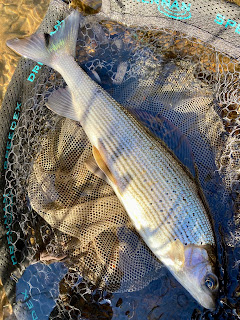 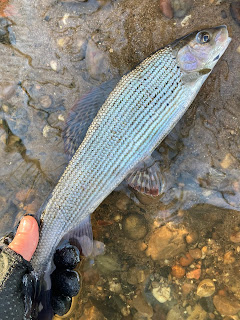 The quality of the fish improved as well and I'd had three nice males over a pound by the time I reached my final swim with about half an hour to spare. 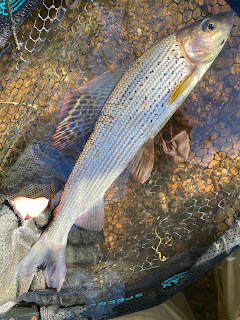 I'd wanted to spend a little longer in this spot as it was where I had caught several chub and dace on my last trip. 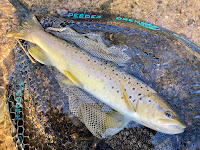 However, after just a couple of  greedy, fat minnows to show for my efforts, it looked as if the freezing overnight temperatures had put the silver fish to bed. Had a quick cup of coffee whilst continuing to feed a in few maggots and next run down I struck into a fish that immediately shot upstream towards me like a startled rabbit and had me spinning the centrepin to keep up with it. After a brief tangle with some tree roots I therefore wasn't really surpised to see an out of season spotty eventually roll into the net.
Added one more grayling after that, albeit another nice one over a pound, before it was time to leave. I'd had twenty five grayling and that single brownie, so not bad morning's work and certainly better than the equivalent three hours sat on a Teams call!
Posted by Toodle