Spent the first few weeks of the closed season catching up with other things, including getting back into my running and working on a "secret" family project (soon to be revealed) that will also have knock-on benefits for fishing trips in future. Easter holidays then came 'round, which obviously meant an obligatory few days down at the in-laws in Pembrokeshire so, despite a mediocre weather forecast and the tides being all wrong, I popped the LRF gear in the car. 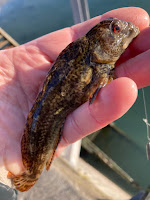 With a stiff breeze coming from the northwest on Saturday, I headed over to Milford Haven having had to scrape the ice off my windscreen before I left. Arrived about two hours after low, but found that only the very end of the pier had sufficient depth to be fishable. Worked through various rigs and baits (including some left-over dendras!) over the next hour or so for a solitary shanny before packing it in. Next morning the wind had swung 'round and was coming from the south-east, so scraped the ice off the car again and headed to Pembroke Dock on the opposite side of the Haven figuring that I couldn't do any worse than the day before. Had a bit more depth to play with off the old car ramp, so was feeling a bit more confident. 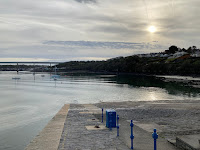 However, whilst I attracted a few more bites, the only fish that appeared to be interested were the ubiquitous rock gobies in their various colour forms. Had a think about other options while I was stood shivering in the wind and a spot of LRF trouting sprang to mind. Unfortunately, as most Pembrokeshire rivers are noted for their salmon and sea trout they are tied up by syndicates or available on a day ticket that would cost the same as a club book in the Midlands. I would also run the risk of getting lynched if I turned up with a lure rod! 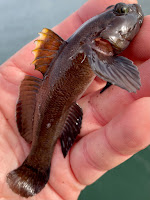 However, on my travels 'round the county I had built up a mental list of potential "orphaned" sections where, due to their dubious locations, any formal fishing interest would be extremely unlikely and decided to have a look at one of these on the way home. Next to a main road and sandwiched between a McDonalds, a dairy and a sewage works, I was pleasantly surpised to find a little stream full of riffles and pools running through a narrow strip of un-managed woodland. A layby provided convenient parking and allowed swift and surreptitious access down to the bankside. Therefore returned early the following morning, parked up and slipped down the embankment into the wood when the coast was clear. 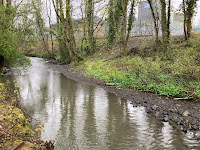 It had rained overnight, so the stream was carrying a bit of colour - runoff from the surrounding urban area - but it didn't concern me as I had a tub full of worms, replenished from the father-in-law's compost heap. Tackle was simple, consisting of 6lb braid mainline, a 4lb flourocarbon leader and a size 12, 0.5 gram, tungsten jig-head. Making like a heron to avoid being spotted, both by any fish and the drivers queuing at the traffic lights behind me, I hooked on a worm whacky-style and flicked it down the first run.
Allowed it to swing into the bank before hopping it back upstream. Second cast it got whacked and any attempt at concealment was abandoned as I played and then swung a pristine wild brownie to hand. 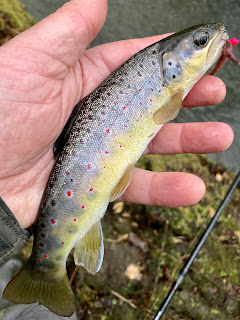 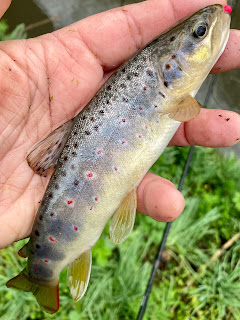 Slowly worked my way downstream flicking the jig into any likely spots, losing a couple in the process to the odd piece of urban junk littering the bed, the only witness to this being a dipper whizzing industriously back and forth. Had another brownie from under some tree roots before coming across a much bigger pool formed by the flow by-passing a broken down and blocked weir. 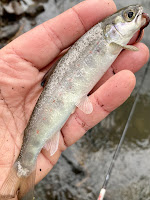 Looked to be a few fish in residence as I had pulls and rattles as soon as the worm hit the deck. Landed a couple more brownies before hooking an unexpected little bar of silver, which I guessed to be a sea trout smolt on his way down to the estuary whilst transitioning into his ocean-going coat. Popped him quickly back and wished him well, then carried on downstream, picking up another little brownie and losing a couple of fish through my cack-handedness. Eventually the inevitable happened and I snagged up on the bottom again, losing my leader and another jig head in the process. Felt I'd thrown enough in the way of pound coins in the river for one day, so didn't bother tackling up again.
Snuck back to the car, although the two other drivers now parked in the layby didn't show any interest in me at all. Vowed to return again and try for some more brownies amongst the bikes and shopping trollies, although a quick look on the web revealed size 12 tungsten jig heads to be rare as rocking horse shit, so perhaps a split shot rig would be more cost effective next time.
Posted by Toodle