Had a couple of meetings up Newark direction, so put trotting rod and a few bits and bobs in the car for afterwards. Headed for an area where roach have been showing the last couple of seasons. Swim was on the outside of a bend where the current just started to hit the bank and where the river had been dredged out on the approach to a weir and the spoil dumped on the bank. With a decent depth right off the rod top despite the low river level it was perfect for the stickfloat. 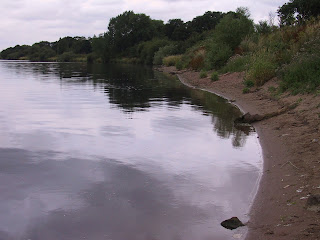 The "sandbank"
Had a fish first trot down and that continued steadily for the next two and a half hours. Ended up with over 60 fish, three quarters of which were roach. Had some nice dace as well, which was encouraging, and a few perch. The "hotspot" seemed to be a depression right in front of me, about a rod length in front of a luncheon meat can that some kind soul had thrown in for a marker (!), the float rarely making it past this point. Definitely a spot to remember for when it cools down and possibly one for the predators as well.
Posted by Toodle