Another quick session on the Soar at Kegworth and almost a carbon copy of my previous one in terms of numbers and species of fish caught. Dropped downstream a bit into some slightly deeper water, but with a nice flow pushing along the far bank. 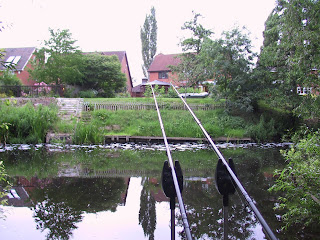 I wish that was my garden over there!
Baits were out by 7.15 pm and the rod tips were soon rattling to the tune of Mr Chublet. The bailiff, Lee, turned up and as we were chatting the left rod started nodding. Sitting higher up the bank he saw the fish first and was able to give me the good news that it was a bream! Had a couple of chublets fairly quickly after that, one of which was good enough to throw up a load of crushed halibut pellets all over my leg. Another bream just as it was getting dark didn't shake the confidence, so when the left hand rod pulled over again I was sure it was going to be a barbel. Unfortunately not! Biggest snotty of the night instead, about 6lb. 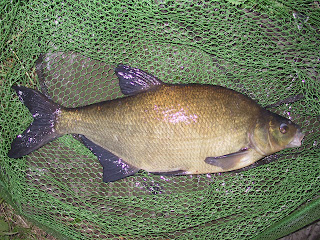 Packed up just after 11 pm after no further action. Think a change of bait is in order. The barbel are there, I just need to avoid those bream!
Posted by Toodle