The brother-in-law was booked to go diving over at St Brides Bay today, so took that as an opportunity not only to meet up, but also to have a recce as it’s a venue I’ve been meaning to visit for a while. 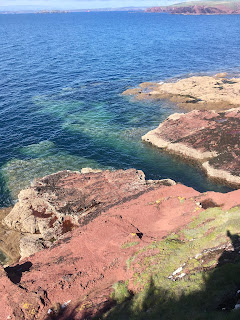 After a quick trip into Pembroke Dock to get some quality ragworm from J & M's Tackle we loaded up the car with fishing tackle, wetsuits, kayaks and body boards and headed out west. Arrived to find the car park absolutely rammed with at least three diving parties and the beach already busy with families. After a quick chat with the brother-in-law I left the others to claim a spot on the beach and headed out on the coast path to find a suitable fishing spot. After only a short distance around the headland I found an easy access onto a rock platform overlooking some deep gullies that screamed wrasse. The water was gin clear and I could clearly see thick beds of seaweed several feet below the surface. Set up a float rod that was cast out to drift over the weed, whilst the other rod was rigged with a twisted boom paternoster with a size 2 Sakuma Mini Manta and a rotten bottom.


Dropped this down the side of the ledge into the gully to the right of my rock perch and was soon getting some knocks and pulls on the rod top. Whatever was responsible, they were just big enough to strip the ragworm off, so I was initially kept busy re-baiting before I finally managed to hook into a couple of small, completely contrasting ballan wrasse. 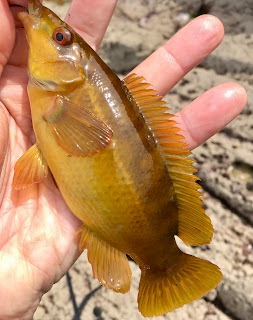 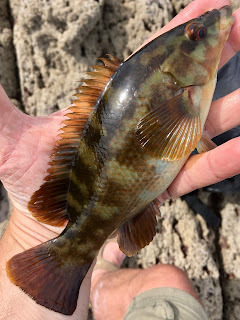 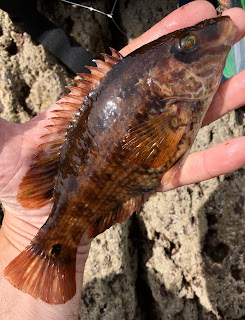 Switching to the gully on the other side of the ledge I was again pestered by bait robbers before my frustration got the better of me and I swapped the rig for one with a size 6 Aberdeen. Almost straight away I hooked into a nice female corkwing wrasse and thought I’d cracked it, but was made to regret changing my rig immediately afterwards. Briefly putting the rod down to take up some slack line on the float I saw the rod tip lunge violently seawards out of the corner of my eye. Grabbed the rod to feel a real lump thumping away on the end of the line before everything went slack. Wound in to find that the fine wire Aberdeen had snapped, almost certainly costing me a very good wrasse. Feeling like a right idiot, I immediately switched back to the twisted boom rig and hopefully dropped it down into the same spot again. 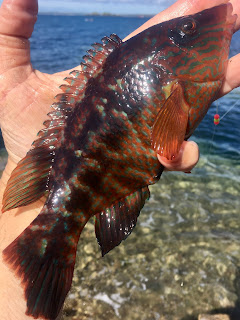 However, whilst I didn’t get a second chance at that lost monster, I did add several more quality, “hand-sized” corkwings including some stunningly colourful males, fittingly looking more like tropical fish in the sunny, blue water setting. Didn’t have interest on the float cast out into open water, where I had hoped that it would have been intercepted by a pollack or two. The possible reason became clear when my lad paddled ‘round on the kayak to see how I was doing. He’d been sat in the bay for only a couple of minutes when a grey seal popped up behind him. They had a game of cat and mouse for a few minutes as each time my lad tried to get close the seal would dive down and pop up behind him again. The seal must have got fed up in the end as it eventually disappeared, but it could also explain the damage to the tail fin of a couple of the larger corkwings I caught as well.

As the tide came in I got pushed off the rocks, so I made my way back to the beach where the family was looking decidedly uncomfortable, compressed onto a narrow strip of shingle surrounded by screaming kids and keen to get off home, so we called it a day. Certainly a stunning venue with big wrasse potential, but one to visit again when it’s less busy!
Posted by Toodle