Was away the first two weekends of the river season and work prevented me from doing anything in between, so today was my first opportunity to get out. Just planned to take a float rod and a pint of maggots and to have a bit of a recce somewhere. 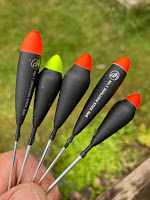 However, it took me three attempts to get some bait as apparently Thursday is maggot delivery day round our neck of the woods and the first two tackle shops I tried were still waiting for the driver to turn up. At least when I got some they were fresh! Talk in the shop was how low the rivers were and how poorly a recent match on the Trent had fished, won with only 5lb. When I said I was thinking of trying the Derwent I was met with a sucking of teeth and "Ooh, very low, very low". To be honest I think the reaction would have been the same whatever I had said, so a couple of hours later I headed off to Draycott anyway. There wasn't a soul in the carpark when I arrived. Whether that was a bad sign I would soon find out! 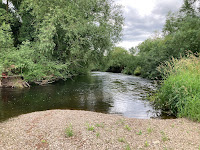 The river did look very low and clear as I crossed the footbridge with gravel exposed where I would normally be standing thigh deep in winter, but I could also see quite a few fish topping further upstream. Walked up to weir at the head of the section just out of curiosity and with thoughts of returning using different tactics, so I was pretty hot and sweaty in my chesties when I eventually pushed my way through the head-high Himalayan balsam to get to my first swim. 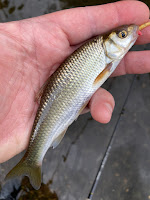 I'd treated myself to some Dave Harrell "shallow sticks" in the close season and today seemed a good opportunity to try them out. I fancied them because of the large, flourorescent domed tops that even my crap eyes wouldn't fail to see, but their compact, chunky design also makes them very stable in fast, shallow water. Ran the float through the first run a few times before eventually getting a small dace, but after half an hour of feeding and trotting there didn't seem to be much about so moved swiftly on. Next swim I tried is a favourite of mine, but I found access blocked by a recently fallen willow. Scrambled around it to find I could still drop into the river and was again running the float down as far as my eyes would let me. 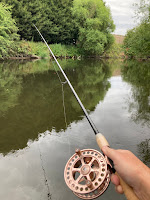 Seemed to be more about here and I started hitting dace, roach, perch and a single summer grayling. As this time last year there were a few late mayflies heaving themselves off the surface of the river, only to be nailed by an assortment of opportunist avian predators, including chaffinches, tits and wagtails. Those that did make it above the tree canopy were quickly mopped up by a waiting squadron of swifts. Had an eye on the clock as there were a couple more swims I wanted to try, so as bites tailed off I headed back downstream once more. Next spot involved a scramble down a virtually sheer 10 feet bank eroded by the winter floods. However, once at the bottom the low water allowed me to wade across and run the float close to the far bank trees.
Started getting bites straight away and added several more dace and a few chub to the tally before my loose feed attracted a horde of small dace or bleak, the water erupting as soon as the maggots hit the surface. The hook bait was just getting mullered, reduced to a hollow skin by the end of each trot down, so after persevering a bit for a couple of better fish I scrambled back up the bank (harder then coming down!) and headed for my final swim. 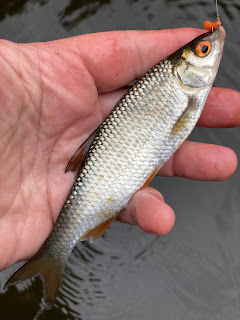 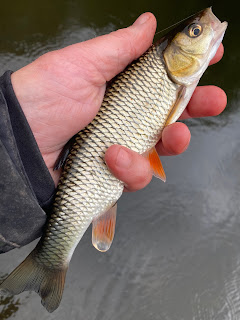 Had been overcast all evening and it eventually started to rain at this point, so the jacket came out of the bag. Was quite pleasant stood in the river with the rain peppering the surface and the sound of the drops hitting my hood, even more so when I picked up another couple of grayling in successive casts - strangely warm to the touch unlike in the depths of winter and needing a bit of tlc to allow them to recover properly before swimming off. 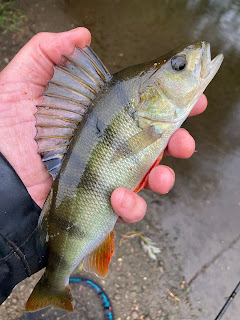 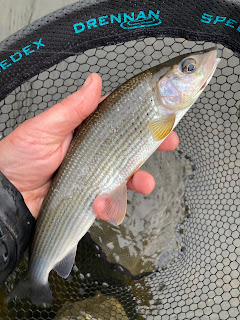 The dace were there again in numbers, along with a couple more perch and chub. Had just released another grayling and the biggest of the evening when the wife rang saying that the Prodigal had returned safely from Uni and that a Chinese takeaway was in the offing. Along with the rain the temperature had dropped swiftly, 23 down to 12 degrees, so I had started to feel a bit damp and chilly anyway (I only had shorts on under my waders), so the offer was too hard to resist. Finished with a nice, mixed bag of fish despite the conditions and the doubts of the doom-mongers and now I've got out once I'll be back again very soon.
Posted by Toodle