Trip to the "perch swim" on the Dove near Tutbury. Went armed with a tub full of lobs and some red maggots. Usual tactic is to float-fish lobworms slightly overdepth and bump them along close to the bank down to the remains of the bush in the picture below. 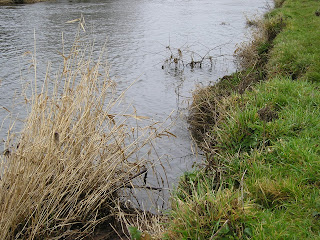 Unfortunately I know from experience that the Dove pike also like lobworms. Had three up to 12lb in one session last season, so I wasn't really suprised when a green, spotty flank rolled on the surface where the float had been a second before. Wound down and didn't immediately get bitten off, so it was game on! Understandably with a 13 foot float rod and 4lb line I couldn't really bully it around. It wasn't until after about 20 minutes give and take that it finally buried its head in the reeds at my feet and let me scoop it up in the net. Hook was right in the point of the lower jaw, well away from any teeth. Scales went 10lb 1oz 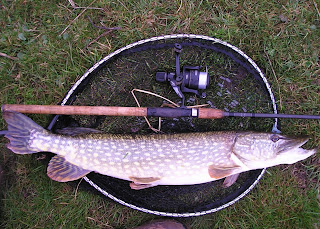 Lean and good looking!
Moved slightly downstream after the disturbance of the pike, bur Mr Perch failed to put in an appearance. Tried the quiver tip as it got dark, but just got pestered by minnows.
Posted by Toodle