Had a couple of lure sessions on the canal after coming back from Wales, but struggled with just a few small perch on the Kopytos. 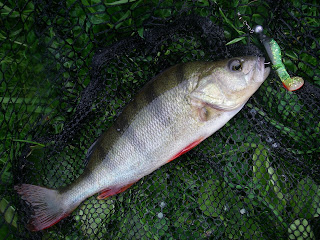 Better than nowt!
Therefore decided to do something completely different and headed off to a small brook in Leicestershire with the fly rod. Had gleaned some information from work that suggested there was a reasonable head of brown trout present, even though it ran very close to housing on the outskirts of a town. Got there nice and early to avoid the dog walkers to find the brook low and clear despite the overnight rain. However, as I stuck my head over the bridge there was a big puff of silt in the margins as something shot off, which certainly raised my hopes. 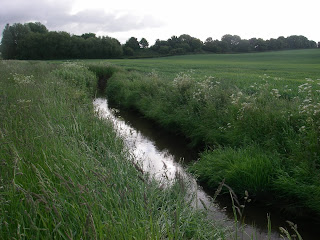 Small, but full of promise!
Walked upstream looking for likely spots, before staring to fish back downstream. The brook was generally less than a foot deep with a couple of deeper holes, but with lots of bankside cover. Not a lot of casting was involved, more flicking or dropping a gold head GHRE into the margins and letting trundle past the overhanging vegetation where I hoped the fish were lying up - more trotting than fly fishing! Had tried a couple of spots before I got a good thump on the rod tip and found myself connected to a fish that charged straight into the side. Slid bum first into the water and scooped it into the net. Back on the bank  I was able to have a good look at my first wild Leicestershire brown trout, all spots and buttery yellow belly. 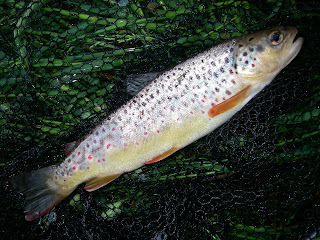 Spotty
﻿Then missed three chances (doh!) in a little pool, before latching onto a slightly bigger "LBT" just upstream of a shallow ford, again fin-perfect and beautifully marked. 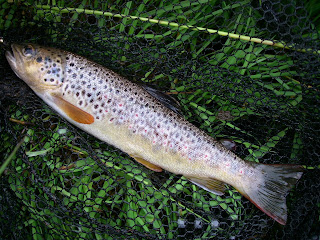 Little beauty
Missed another chance a bit further down then added another of a similar size. By now the dog walkers had started to appear and a blustery wind started getting up, which was making presentation difficult, so headed back to the car avoiding the dog mines. Didn't think that was bad for a quick recce and was fully deserving of the bacon sandwich I had when I got home.﻿
﻿
Posted by Toodle