A surfing trip to North Devon earlier in the month gave me another opportunity to meet up with Joel Squires (aka www.joelsoul.co.uk) and a chance to break my bass duck. Unfortunately the weather had other ideas. The cold, wet conditions and howling onshore wind had virtually knocked the surfing on the head and the fishing didn't fare much better despite Joel's usual optimism. Gave it an hour or so with soft plastics before the weather worsened and we were forced off the rocks by the incoming swell. Another time, mate!

Next opportunity was a few days down in Pembrokeshire. Weather had improved significantly, but a brisk, northerly wind saw me looking for some shelter down on the South coast. Had spotted a nice, rocky headland near Manorbier whilst out on the coast path earlier in the year that looked promising. Spent a couple of hours flicking soft plastics into likely looking holes and gullies for wrasse with no response, so moved 'round to the adjacent rocky bay and changed over to surface lures for the bass. However, that failed to attract anything either. Was beginning to think it wasn't ever going to happen! 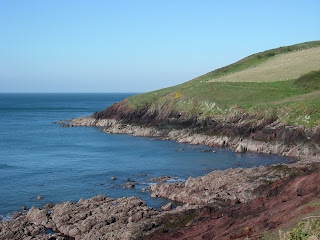 Looks good, but where were the fish?


Next day the wind had dropped significantly, so it was down to the estuary at Lawrenny. Had timed it just right - the boats were just swinging around on their moorings to face the incoming tide and the water level was starting to creep up the shore, lifting the empty mussel shells and sending them floating off upstream like miniature coracles. 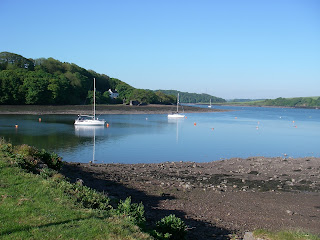 Down on the estuary
Started off with a popper, but then spotted some small bait fish and spooked something bigger in the shallows. Had a look in the box and found a Megabass X-130 in sardine that seemed to fit the bill. Fourth or fifth cast out into the channel I had a satisfying clonk on the rod tip and after a short, spirited fight I was looking at my first bass in the shallows - only about 1lb, but all spines, flared gills and attitude. Popped him back and a couple of casts later was looking at his twin brother. Had two more, biggest about 2lb. 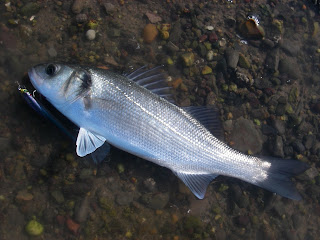 Bass!﻿
By now the tide was really pushing in and the jellyfish were flying past my knees. That seemed to herald the end of the action, but went home happy and a bit relieved! Next day saw me down in the same spot, albeit an hour later to catch the same state of the tide. Stuck with the X-130 and it did the business again. Had three bass up to about 2lb  again before the flow picked up and the fish were gone, presumably off upstream. 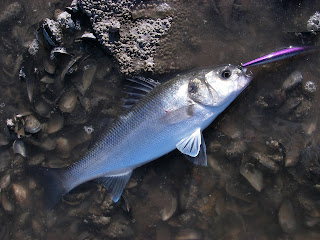 X-130 strikes again
Stopped off briefly on the way home to watch some impressive-looking mullet bow-waving and feeding in a few inches of water, right on the margins of the incoming tide. Maybe next time?!
﻿
Posted by Toodle