An annual holiday somewhere with the "lads" (youngest 54, oldest 65!) has now become an permanent fixture in the calender. Unfortunately our planned trip to Sardinia earlier this year was cancelled to the dreaded COVID. However, by way of recompense we ended up in a cottage on the scenic Roseland Peninsula in Cornwall for a week in September instead.

The plan was do a bit of walking, surfing, paddle-boarding and just generally chill out and catch up. However, a quick look on Google beforehand revealed a nice-looking rocky cove within walking distance of our digs, so some bits of fishing tackle went in as well, with wrasse, bass and mini-species in mind.
Managed to source some ragworm, albeit on the turn and barely usable on close inspection, from a local garden centre and popped down with the wrasse gear one evening at high tide. Found a nice looking gully and fished a simple twisted boom rig with a single size 4 hook and a rotten bottom down amongst the boulders and the kelp. Unfortunately my one chance came when I had my back turned ferreting in my bag for something and I turned round to see the rod bent double. That was enough for a suspected decent wrasse to well and truly snag me and after some alternate slack-lining and heaving the rig eventually came back minus lead and fish. 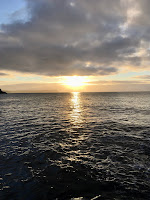 On the plus side, another angler had arrived and was obviously lure fishing for bass. After a quick chat, which established that he was local and sounded like he knew what he was talking about, I at least made it back up the cliff with some idea of what to try next. A couple of mornings later I was therefore back at first light with the lure rod with the intention of fishing one hour either side of high tide. Made my way out to the end of the rocks and started casting a white, weedless Savage Gear sandeel out into the gentle swell. A couple of cormorants were actively working the bay and, whilst I didn't see them come to the surface with anything, I took this to be a good sign that prey fish were about and with them hopefully the predators that I was after.
The rising sun briefly made an appearance between the horizon and the low cloud, but otherwise it stayed dull and overcast and I briefly had to put on my waterproof as a light shower came through on the light westerly breeze. Had been fishing away for about 15 minutes when I got the thump on the rod tip that I was hoping for. 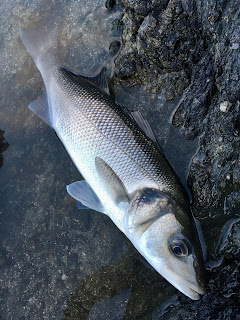 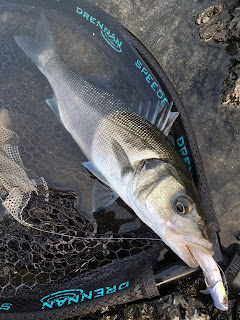 After a spirited fight and near cock-up with the landing net I was looking at a pristine schoolie bass in the safety of a nearby rock pool. Popped him back and very next cast had another! Things were looking good and got even better when I added a third a few casts later. Went a bit quiet after this, so I moved slightly to my right to cover some different ground and duly added a fourth little spikey. 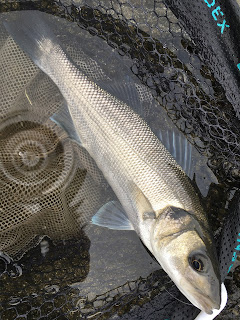 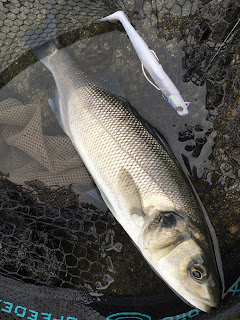 Moved a couple more times but, as quickly as they had appeared, the bass seemed to have passed through. Didn't help that a grey seal suddenly popped up in front of me and just sat there despite some arm waving and choice words! To be honest my stomach was rumbling by now so I left him to it and headed back for breakfast, my morning's work making the long climb back up the cliff seem a little easier - but not by much!
Posted by Toodle