Arrived back in Nottingham from my Cornish idyll to be plunged into a family crisis. Mum's dementia carers had arrived at her home one day to find empty packets of pills and she had been rushed to hospital on suspicision of an accidental overdose. Thankfully this was not the case, but then safeguarding issues were raised and social services became involved. Mum then had to spend six days in hospital with no visitors whilst various assessments were carried out and paperwork completed - a very confusing and frightening experience for an 80 year old with her condition. The family has basically now been left to deal with the aftermath. For me this has already meant several 2hr+ round trips to Birmingham to visit her while she is temporary respite care. As a result, before this week had even started, I was feeling mentally and physically drained. My wife therefore suggested that I take a break and go fishing to clear my head. 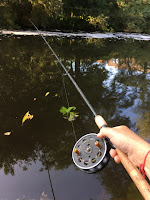 Whilst I actually felt more like nipping to bed for an afternoon snooze, I subsequently threw my tackle in the car and dragged myself into Long Eaton to get some maggots. Plan was to do some trotting with the pin, but have a sleeper rod out for the perch at the same time. With that in mind I headed to the River Soar near Kegworth. As I walked upstream to the weir the local farmer was busy baling up the last of his wheat straw, a reminder that autumn was definitely on it's way despite the warm, sunny conditions. Crossed the lock and followed the path throught the nettles, a bit more defined since my last visit but still hardly indicative of much angling pressure as this section of the river tends to be neglected by those wanting an easy walk and a nice level spot for their seatbox.
Got to my chosen swim to find the river carrying a tinge of colour but very low. This had me wishing I'd brought the longer float rod as the main flow was pushing along the far bank. Thankfully I'd had the foresight to put on my chesties and I was able to wade out far enough to reach the crease with a gentle underarm flick. 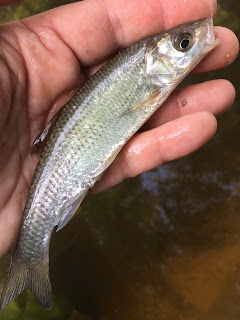 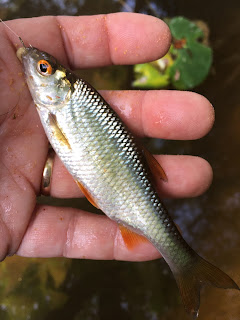 First trot down and the stresses of the week were temporarily forgotten as the float disappeared at the end of the run and my first fish, a bleak, came to hand. Was therefore able to get the perch rod out early doors, positioning the bleak on a paternoster at the downstream end of my swim just off the crease. Carried on trotting away and building up the swim with a few freebies each time, hopefully attracting some predators at the same time. 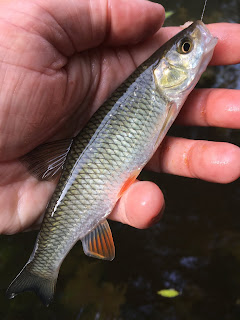 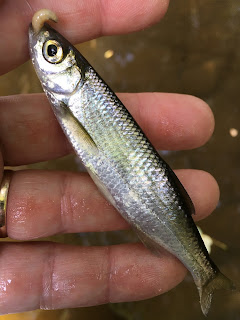 There was obviously a lot of small stuff about as the maggots were invariably getting crushed each cast. However, thankfully the dace soon appeared, bullying the bleak out of the way, but allowing the occasional roach and chub to also get a look in. Out of the blue, a couple of bleeps on the micron indicated some interest on the other rod and I was on it before the line pulled out of the clip. Wound down to feel a solid weight and applied some pressure to see something long, lean and spotty loom out of the depths before it decided to wake up and spit the bait. 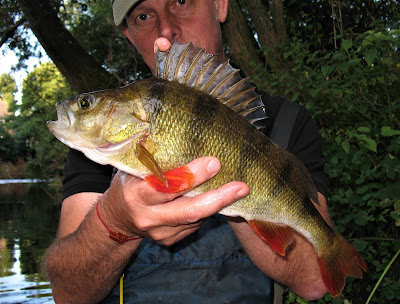 Oh well, not what I was after anyway. Another bait was therefore quickly obtained and the paternoster re-positioned. Had started to pick up a few perch on the float rod by now, so was hopeful that a bigger one might be lurking on the fringes. 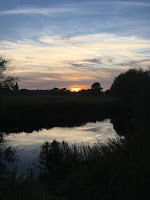 As if on cue, I had another take on the paternoster and again wound down into a fish. However, this time I felt a welcome, tell-tale head thumping on the end of the line. A flash of red fins and black stripes as it went into the net confirmed it was what I had been after. Not a monster, but at a gnat's over two pounds, it was the biggest perch I'd had from the river for some time. Carried on for bit with the float rod and after two and a bit hours had amassed a mixed bag of sixty-odd fish, the vast majority being dace. Didn't manage to get any ruffe or gonks this time, but a decent stripey was ample compensation for that. Headed back to the car just as the sun was dipping below the horizon, glad that I'd made the effort and still with the best part of a pint of maggots - enough to treat myself to some more fishing therapy in the near future.
Posted by Toodle