Flushed with the success of the previous morning I once again zig-zagged my way down the cliff at first light. On this occasion the day dawned bright and sunny. Again, the cormorants and the seal were in attendance and at one stage I had a shoal of sandeels at my feet. However, despite going through my whole repertoire of lures, I eventually headed back up to the cottage frustrated, frazzled and fish-less!

On the plus side, the tide had also been a bit lower when I arrived this time, exposing some interesting looking rock pools in the gullies that had me thinking about a species that has been on my wish list for quite a while - the giant goby, Gobius cobbitis. Confined to sheltered beaches on the south-west coast of England, this mini-monster spends its life in the rock pools at the highest extent of the inter-tidal zone and if these have a bit of freshwater running in to make them brackish even better. There it munches on gut weed and consumes anything unfortunate enough to be washed in with the tide. Living for up to ten years and reaching a maximum length of nearly 30 centimetres it is a target for any self-respecting LRF angler, but one I had not a chance to try for. 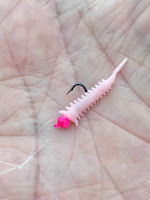 A few hours later I was therefore back down again (absolutely no problem getting my 10,000 steps in today!). Tactics were simplicity itself - a 0.5 g bright pink, tungsten jighead baited with the tail section of a mini-isome worm, which would be "dabbled" in front of any likely-looking goby lair. Creeping up to the first rock pool I lowered the jig down the side of a large rock and wiggled the isome with the tip of my Rock Rover in what I hoped was a suitably provocative manner. It must have been a higly amusing sight for anybody looking down from the coast path to see a fully grown man basically fishing in a puddle. However, I thought I had nailed it first cast when a fish shot out, grabbed the bait and shot back under the rock. 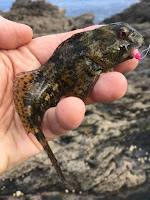 Unceremoniously dragged him back out into the daylight kicking and screaming only to find that it was just a mere pretender to the rock pool crown - the perpetually glum-looking shanny, or common blenny. Popped him back under his rock then proceeded to try a few more spots, but it seemed that only shannies were in residence and my enthusiasm began to wane. I eventually came to the final pool, which was no bigger than a bath and only inches deep. Again, I made the isome do its little jiggy dance in front of a gap under the only rock big enough to house a potential "monster". Literally a split-second later something aggressively launched itself out from its hidey-hole and wolfed down the worm down with gusto.

This time I knew straight away that I had my intended quarry and after another one-sided tug of war I was looking at my first giant goby and he certainly was a splendid chap - fine scaled and deep brown in colour with a head like a bulldog. 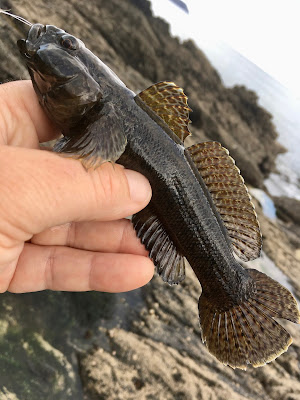 Returned him to his pool, hopefully to terrorise his tiny domain for a few more years, then scampered back up the cliff despite knackered knees and with a stupid grin on my face - job done!
Posted by Toodle