Looked pretty gloomy over Derby way, but set off anyway. At least I wouldn't have any "wild swimmers" to worry about!
Arrived at the (empty!) carpark just as it brightened up. There was a Little Egret on the shallows, but it spotted me coming and scarpered before I could get a photo. Went past where I would be fishing later to where there was a bit more flow for the trotting rod. Started catching a few bits straight away, including some nice roach. 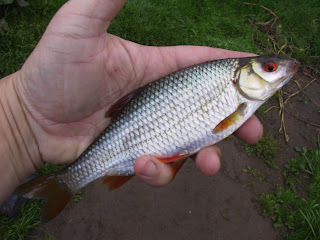 Unfortunately this soon caught the attention of at least one pike that appeared in the margins under my feet. Therefore decided to make an early move, rather than get smashed up again by a spotty bait-snatcher. As it turned out, it didn't really make much difference! Got the bait fish going in my new swim before putting out two perch paternosters. What followed was a repeat of last trip. Had three takes, but all from pike, biggest about 8 lb. All safely landed with the modified rig and good fun on the light tackle, but not what I was after. Think a change of venue is due now. Might even get the barbel rods out again....
Posted by Toodle