Returned to Milford yesterday morning with bass as the target. Had witnessed a chap catch a couple off the end of the pier last summer on a big, ebbing tide and was hoping to replicate his success. 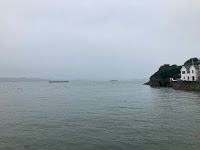 Weather again was grim, with more "wet wind" and poor visibility up and down the haven. The rag that I'd bought the day before, whilst kept in the fridge overnight, had already started to go off a bit (the difference between dug and farmed rag it seems), so I sorted all the manky bits out and used them on the light rod to keep myself amused over slack water. Again corkwings were in abundance and I quickly had about a dozen of them -  mostly tiny but with one better male making an appearance. 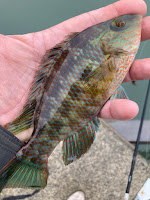 An equal number of shannies and a few pollack and small ballans were also added to the tally before it was time to get the bass rod out. The frozen peelers I'd bought turned out to be pretty small, so I elasticated a couple onto size 2/0 before lobbing them out into the now outgoing tide on a simple running leger. Wound in half an hour later to check the bait to find it had been completely stripped, so re-baited and sent it out once again. Repeated the process again 15 minutes later but, apart from the crab activity and one proper pull down that didn't amount to anything, it was pretty quiet and I packed up bass-less. Grabbed a coffee and a bacon bap (no ketchup issues this time) again on the way home, stopping off at Milford waterfront where I found that one of my favourite fishing spots, the "bullnose", was now inaccessible. 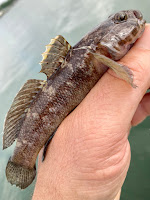 Since my last visit the harbour authority had installed a hydrogen vehicle charging point for a leaseable car that looked like something out of the Jetsons - that's progress! Therefore changed tack this morning and headed for Hobbs Point instead to try for a decent wrasse. With the large tides I knew I'd only get a small window of opportunity at this spot, so got there well before slack water. In fact I was so early that the incoming tide was still ripping along the wall when I arrived, so I adjourned to the local Lidl for a couple of their delicious Portugese custard tarts (they're only small!). While I was there I bumped into David Miller, who will be known to most of you as the artist responsible for the fish pictures on our rod licences. 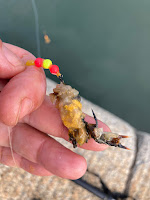 However, he also takes some amazing underwater photography around the Pembrokeshire coast with subjects including puffins, bass and blue shark. For his website see here and Facebook page here. Headed back to Hobbs after a quick chat and set up a simple flapper rig with two size 2 Aberdeens, each baited with half a peeler - what could resist? Dropped it straight down the wall so they would waft about amongst the kelp. As yesterday, I also popped out the light rod baited up with more scraps of rag. The fish were straight onto this, more specifically the rock gobies in all sizes and colour variations. Therefore thought it was going to be the usual goby-fest, but had a couple of nice surprises in the shape of a tompot blenny and then a long-spined sea scorpion, both quite rare in these parts (well, for me anyway). 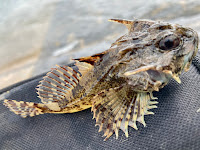 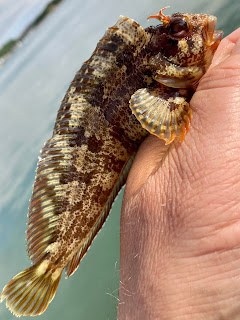 The other rod had been very quiet when all of a sudden I spotted the tip jag down and the butt fly up. A short scrap resulted in very pale ballan wrasse - not massive, but bigger than anything I'd caught so far this weekend. Popped him back without any issue (they can be a bit flaky if you bring them up too quick here because of the depth), re-baited and dropped the rig down the wall again. 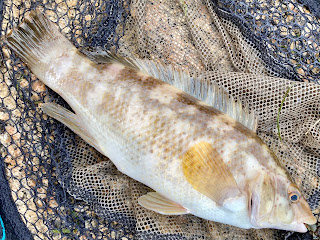 Carried on catching gobies, interspersed with a few pollack that were intercepting the bait on the way down. Whilst the other rod did eventually rattle off again, it was a much smaller ballan this time. The ebbing tide had now started to rip and boil along the wall, so decided to call it a day at that, donating my few bits of left-over rag to a dad and his lad fishing on the other side of the ramp. Hopefully we'll be back for a longer stretch at the end of August when I'll be looking to get some serious bass and wrasse fishing done.
Posted by Toodle