Switched my attention to wrasse for the remainder of the holiday, with a trip up to St Bride's for starters. 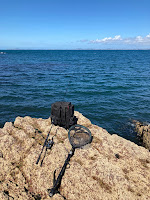 Had fished here a couple of times before and had quite a few small wrasse, but had seen a fish whilst out paddle boarding that dwarfed anything I had caught to date. Walked around from the beach in brilliant sunshine to get to the rock mark at low water, but with hindsight I could have left it another couple of hours before starting to fish. Rather than fishing under the rod tip as previously, I had to cast over the exposed kelp to find some depth. Fished a two hook flapper with size 4 heavy gauge Aberdeens baited with rag. As a concession to the snaggy ground I'd added pop ups to the shortened hooklinks and tied on a rotten bottom. Was a good decision as the first fish of the day snagged me up and after a bit of pulling the rig came back minus lead. 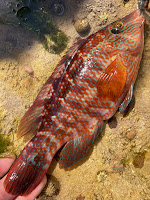 Subsequent bites were slow in coming and when my alloted time was eventually up (the wife and mother-in-law were waiting for me back on the beach!) I'd only had a couple of corkwings, albeit both stunning males. The following session was up at Fishguard. Arrived just after first light and made the long walk along the inner breakwater to find a "tinsel tosser" had already bagged prime spot on the concrete apron at the end, so had scramble over the rocks to find an alternative position to fish from. Tackle and bait were the same as the previous day with the rig being cast out and then allowed to swing back in on a tight line to hopefully rest out of the weed but somewhere near the base of the sloping side of the breakwater. 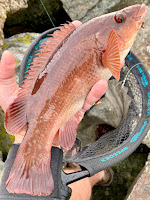 The first half an hour after high water was slow with just a large and very angry velvet swimmer crab taking the bait. However, thing suddenly picked up and I had a mad 30 minutes that resulted in one corkwing and seven ballans, but several more missed bites and stripped baits. However, as quickly as the bites started they completely dried up. The tide had started ebbing by now so wondered if this was the reason until a big, fat seal surfaced under my rod tip, rolled his eyes at me and went lazily on his way. When a cormorant popped up in front of me just a couple of minutes later I decided to call it a day! Returned the following morning to find the conditions a bit less inviting with a stiff wind pushing a swell straight into the bay. 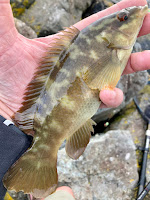 However, got to the end to find that another mackerel basher had beaten me to it again, so made my way over the rocks once more. This time bites were immediate, but I couldn't connect with any of them and was repeatedly re-baiting stripped hooks. The reason became apparent when I eventually foul-hooked a tiny corkwing. Every time thelead hit the bottom it must have been like banging a dinner gong because as soon as I put the rod down the tip started bouncing away as the little beggars zeroed in on my baits. Eventually managed a couple of small ballans before my time again ran out. Had eked out my ragworm to allow one final session at Hobbs Point this morning. 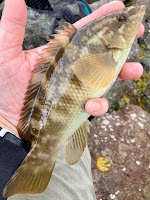 Got there for high water knowing that my window was going to be limited due to the big tide. Dropped my rig straight down the side and left it to do its stuff while I used the mankier bits of rag on the LRF rod. Was kept busy by the small stuff, including rock gobies, pollack and corkwings, while the wrasse rod remained motionless. After about 50 minutes the tide turned and started ripping along the wall forcing me to put the LRF rod away. Rebaited the wrasse rod, dropped it down the side again and literally turned away for two seconds, distracted momentarily by a shoal of bait fish flashing under the surface. Turned back to see the rod bent double. Made a grab for it, but the tip had already sprung back and the chance had gone.

Not the most satisfactory way to end the session and the holiday, but I've caught a fair few fish over the two weeks, with the trigger fish being the highlight. I'll be back soon and I've got a week in Cornwall coming up in September to look forward to in the interim.