Haven't been out on the rivers lately - didn't seem right with them down to their bare bones. Even the mighty River Trent has been showing the strain with a fraction of the normal flow passing over the weir at Beeston. Therefore didn't come as a surprise when the Environment Agency announced drought status across 8 of its 14 areas, with only far the north-west being classed as under "normal" conditions. 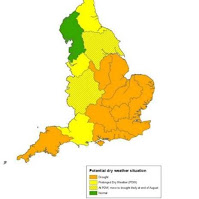 This state of affairs happened to coincide with the start of our two week holiday in Wales where hosepipe bans had already been announced in Permbrokeshire and Camarthenshire due to reservoirs falling to critical levels - not that you would have known from the relatively lush, green grass in the fields on our way through to the in-laws. However, the most important job upon arrival was to get some bait so, after unloading the car, I headed off to J & M Tackle in Pembroke Dock for some rag and crab, although I had to wait patiently while the customer in front of me had a five minute rant about the current state of Man United - effing and jeffing away in front of his two young kids! 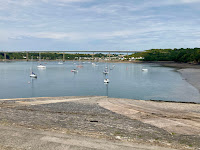 As usual the rag were top drawer and as thick as my little finger. Seemed a shame to miss an opportunity while I there, so headed over to Hobbs Point. I'd accidentally on purpose timed my visit to coincide with low water. On the back of the recent springs, the day's tides was still big enough to expose the end of the old car ramp, not only allowing access to the weed-lined fringes but also to the siltier ground beyond. Chopped a couple of the smaller rag into bits and used them to bait up a mini two hook flapper made up with size 10 Sabpolo wormer hooks.

Dropped straight down the side past the kelp the bait was immediately snaffled by the inevitable rock goby or small pollack. However, swinging the rig slightly further out over the silt allowed the black gobies to get a look in. 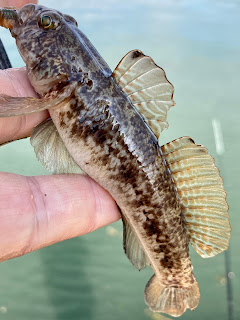 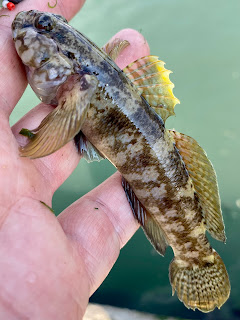 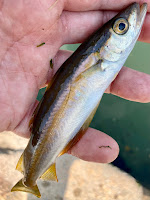 Stood at the end of the ramp with the sun baking the backs of my legs for the next hour or so until the tide started properly flooding. Ended up with forty-odd gobies, a few pollack and a couple of corkwings. The following morning I had planned to go wrassing or bassing. However, disaster had struck overnight  - the mother-in-law's spare fridge that I'd been allowed to put my bait in had been turned up to max, so by morning my quality rag had frozen solid! Therefore hastily decided on another mini-species session, this time heading to Milford Haven in order to get some shelter from the brisk northerly wind. In contrast to the bright, sunny day at Hobbs it was dull and overcast and despite having the hill to my back it was still quite breezy out on the pier.

The rag had thawed out by the time I got there with some of them miraculously showing signs of life. However, the mini-species don't seem to care whether they are alive or dead and it makes no difference when they're chopped into bits anyway! Dropped my baited rig down the side and started getting rattles straight away, which were soon converted into a procession of corkwings, small ballans and pollack. 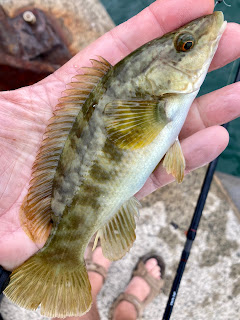 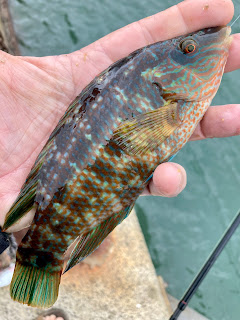 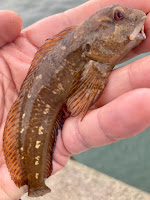 As soon as the tide started ebbing along the wall I moved to the area of slack water off the end of the pier. The corkwings must have been stacked in this small area like sardines as they were coming up two at a time, with only a solitary shanny to break their monopoly.  The northerly wind had really got to me by now to the extent that I was actually shivering so when a big group of kids turned up and started tombstoning off the steps it seemed a convenient time to call a halt, having had over 30 corkwings, 9 pollack, 4 ballans and that solitary blenny. Whilst I obviously enjoy catching fish whatever the variety I really need to find some new marks now as the old ones are becoming very predictable!
Posted by Toodle